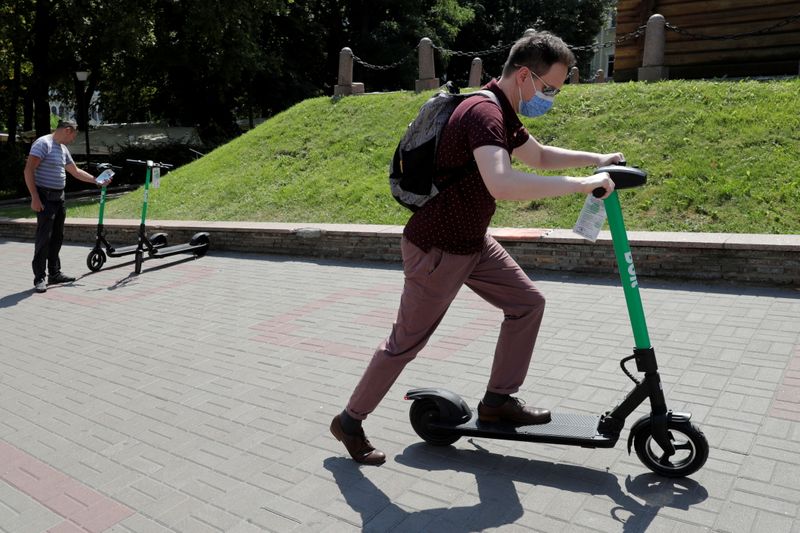 FILE PHOTO: A man wearing a protective face mask amid the outbreak of the coronavirus disease (COVID-19) uses an e-scooter from provider Bolt in central Kyiv, Ukraine August 7, 2020. REUTERS/Valentyn Ogirenko

BERLIN (Reuters) - Estonian start-up Bolt launched electric scooter services in nine German cities on Tuesday, saying the rollout was the biggest of its kind and challenging rivals with ultra-low pricing.

Bolt, formerly known as Taxify, will offer rides for as little as 0.05 euros ($0.06) per minute with no unlocking fee, undercutting competitors that typically charge 1 euro per trip plus 15-25 euro cents a minute.

Bolt is one of a crop of so-called micromobility startups, including Tier, Lime and Voi, seeking to replace cars in city centres with more flexible and sustainable transport.

Active in more than 40 countries, Bolt already has 130,000 e-scooters on Europe's roads. It is starting in Germany with a fleet of 15,000 two-wheelers in Berlin, Munich, Hamburg, Cologne, Frankfurt, Nuremberg, Stuttgart, Potsdam and Fuerth.

Asked how Bolt could compete so aggressively on price, Villig said it was able to spread the cost of services including ride hailing, electric bicycles, food and parcel delivery and car sharing across its technology platform.

Bolt also aims to offer superior reliability with its latest Bolt 4 scooter model, which comes with a modular, easy-to-repair design and which can be fully recycled.

More broadly, Bolt is looking to expand its presence into 150 European cities this year as part of a 100 million euro investment strategy, which it said would make it the region's largest micromobility provider.