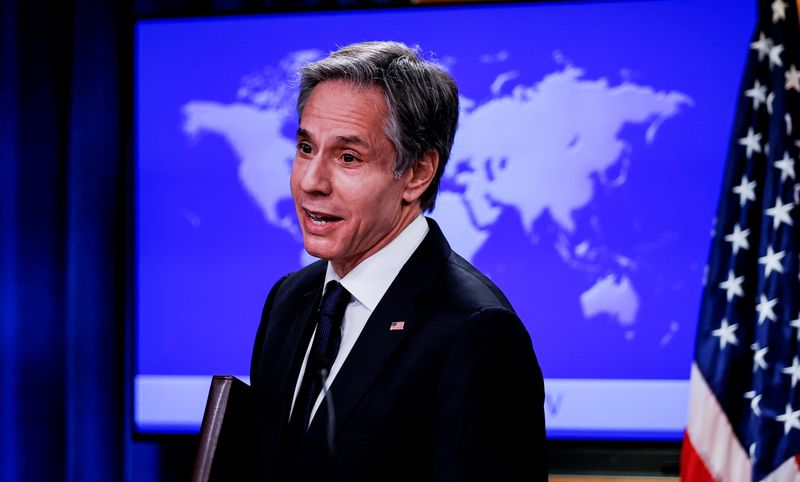 Blinken told NBC News he was "deeply disturbed by the violent crackdown" on Russian protesters on Sunday and arrests across the country of people demanding the release of Navalny, a prominent critic of Russian President Vladimir Putin. More than 5,300 people were detained in a massive show of force.

"The Russian government makes a big mistake if it believes that this is about us," Blinken said in the interview. "It's about them. It's about the government. It's about the frustration that the Russian people have with corruption, with autocracy, and I think they need to look inward, not outward."

Blinken did not commit to specific sanctions against Moscow in the interview, taped on Sunday. He said he was reviewing a response to the actions against Navalny, as well as Russian election interference in 2020, the SolarWinds hack and alleged bounties for U.S. soldiers in Afghanistan.

"The president could not have been clearer in his conversation with President Putin," Blinken said of President Joe Biden's telephone call last week with the Russian leader.

Blinken also took issue with China's actions in Hong Kong, saying it acted "egregiously" to undermine the island and said the United States should accept people fleeing the crackdown there.

"If they're the victims of repression from Chinese authorities, we should do something to give them haven," he said.

He also cited China's lack of transparency with regard to coronavirus as a "profound problem", saying Beijing is falling far short in allowing experts access to the sites where the coronavirus was discovered.

Blinken warned Iran was months away from the ability to produce the fissile material needed for a nuclear weapon.

He told NBC it could be only "a matter of weeks" if Iran continues to lift restraints in the 2015 nuclear deal that the United States pulled out of under President Donald Trump.

On North Korea, Blinken said additional sanctions could be used in coordination with U.S. allies as a way toward denuclearization of the Korean Peninsula. Other tools include unspecified diplomatic incentives, he said.

(This story adds dropped word "against" in headline)