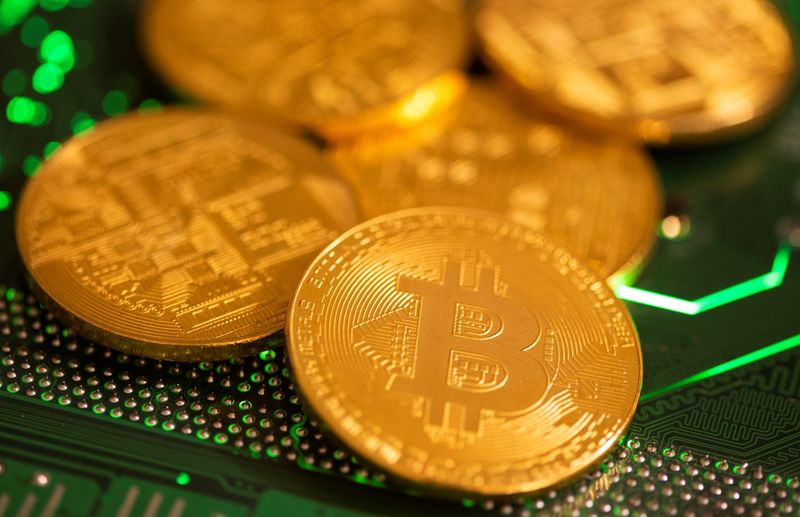 FILE PHOTO: Representations of virtual currency Bitcoin are placed on a computer motherboard in this illustration taken January 21, 2021. REUTERS/Dado Ruvic/Illustration

NEW YORK (Reuters) - Investment flows into cryptocurrency funds and products hit a record $1.31 billion last week after a few weeks of small outflows, as investors took advantage of the decline in bitcoin and other digital asset prices, according to the latest data on Monday from asset manager CoinShares.

"We believe investors have been very price conscious this year due to the speed at which prices in bitcoin achieved new highs," said James Butterfill, investment strategist, at CoinShares.

"The recent price weakness, prompted by recent comments from Secretary of the U.S. Treasury Janet Yellen and the unfounded concerns of a double spend, now look to have been a buying opportunity with inflows breaking all-time weekly inflows," he added.

About 97% of inflows went to bitcoin, the data showed, with Ethereum, the second largest cryptocurrency, posting inflows of $34 million last week.

So far this year, volumes in bitcoin have been considerably higher, trading an average of $12.3 billion per day, compared to $2.2 billion in 2020.

Glassnode, which provides insight on blockchain data, said in a report on Monday that bitcoin's net unrealized profit/loss (NUPL) was getting close to exceeding the "belief" range and moving into the "euphoria" range.

Previously, when NUPL entered this range, it signaled a global top in bitcoin's price.