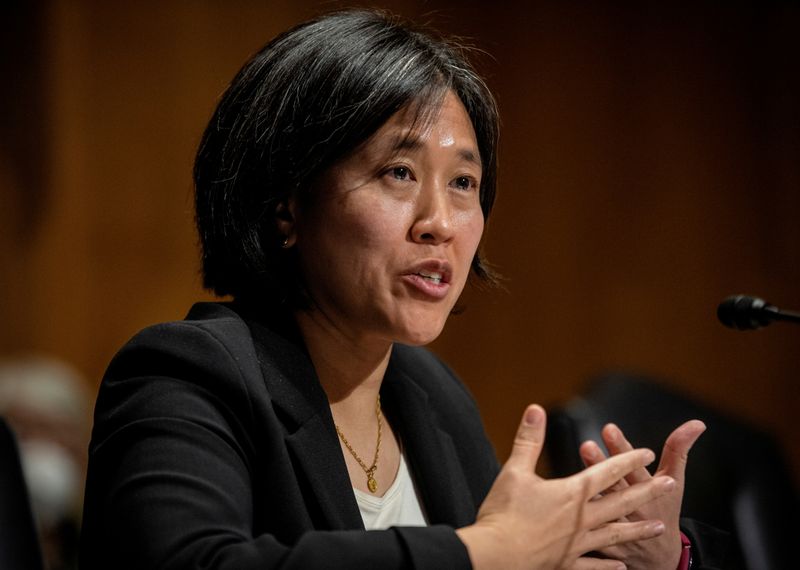 WASHINGTON (Reuters) - President Joe Biden's U.S. trade representative nominee, Katherine Tai, said on Monday she would work to fight a range of "unfair" Chinese trade and economic practices and would seek to treat Chinese censorship as a trade barrier.

In written answers to senators' questions following her confirmation hearing last week, Tai said she would seek to use the enforcement consultation process in former President Donald Trump's "Phase 1" trade deal with China to ensure the protection of American intellectual property.

"I am open to exploring a wide range of options to address our long-standing problems with Chinaâs unfair trade practices, including bilateral talks," Tai wrote. "However, I will not hesitate to act if those talks prove ineffective," she added, without naming specific consequences.

She said she would work to address market access restrictions that prevent U.S. companies from competing in the Chinese market, including for cloud computing. She told Republican Senator John Cornyn that Chinese government censorship policies also disadvantage U.S. businesses, and that if confirmed, she would work with him "to develop trade policies that treat censorship as a trade barrier."

Tai's written answers to Senate Finance Committee members' questions were seen by Reuters as the U.S. Trade Representative's Office released a report on the Biden administration's trade agenda that included consideration of a border adjustment tax on goods from countries with high carbon pollution and a vow to combat China's use of forced labor in its Xinjiang region.

Asked how she would handle "Section 301" tariffs on Chinese goods and tariff exclusions that are now expiring, Tai said she would work to "ensure that those tariffs are appropriately responsive to Chinaâs practices and take into account the impact on U.S. businesses, workers and consumers."

In a nod to the U.S. energy sector, Tai also said she would work with the Department of Energy and the Department of Agriculture to promote market access for American energy exports, including liquefied natural gas and ethanol.