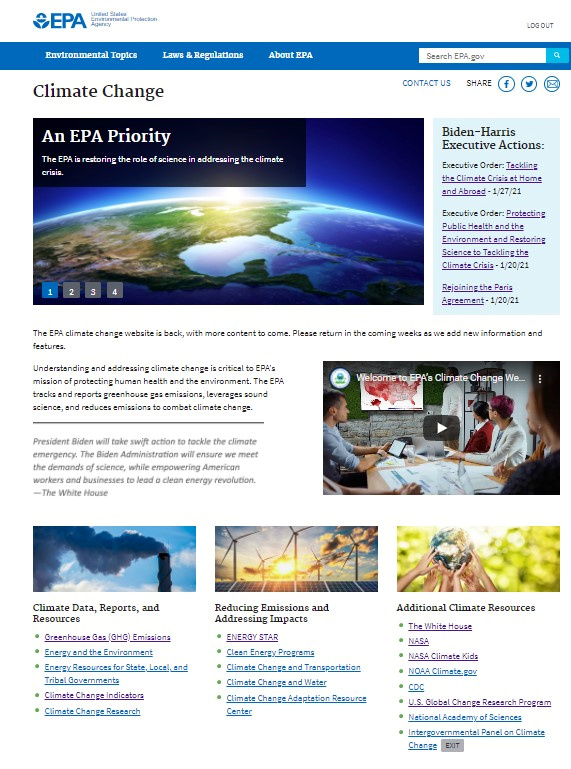 WASHINGTON (Reuters) - The U.S. Environmental Protection Agency restored a page containing key climate change information to its public website on Thursday, four years after the Trump administration had removed it as part of a strategy to downplay global warming threats.

The move reflects the massive gulf between Democratic President Joe Biden and Republican ex-President Donald Trump on climate change that is likely to result in sweeping policy changes in the coming years to tamp down on planet-warming emissions from vehicles, power plants, and industry.

"Climate facts are back on EPA's website where they should be," EPA Administrator Michael Regan said in a statement provided to Reuters. "Considering the urgency of this crisis, it's critical that Americans have access to information and resources so that we can all play a role in protecting our environment, our health, and vulnerable communities."

Regan is expected to play a key role in carrying out Biden campaign promises of decarbonizing the U.S. electricity sector by 2035 and steering the economy to net zero emissions across by 2050. He attended his first Biden administration climate change task force meeting on Thursday led by former EPA Administrator and Biden's national climate adviser Gina McCarthy.

The Environmental Data & Governance Initiative (EDGI), which tracked federal agency websites' mentions of climate change under Trump, found that the use of the term decreased almost 40% between 2016 and 2020.