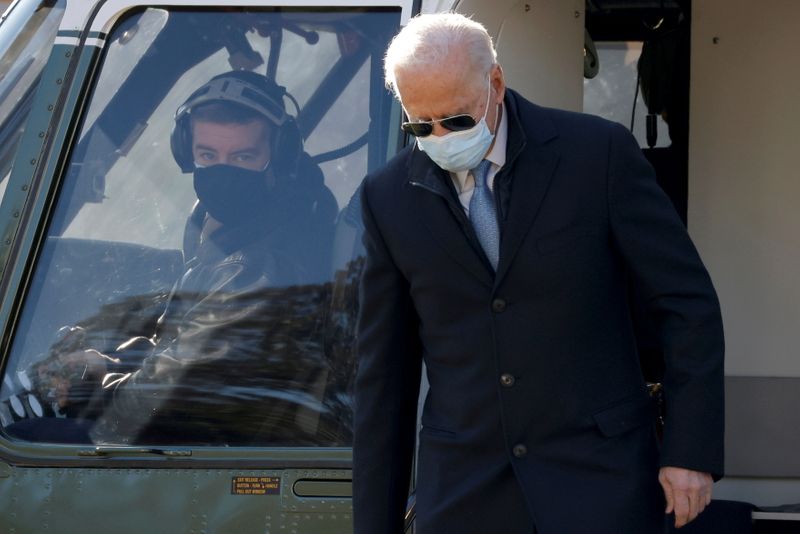 U.S. President Joe Biden steps off Marine One as he arrives on the South Lawn at the White House in Washington, U.S., February 8, 2021. REUTERS/Carlos Barria

By David Lawder and Andrea Shalal

WASHINGTON (Reuters) - U.S. President Joe Biden's plan to raise the minimum wage to $15 per hour by 2025 would cut employment by 1.4 million jobs that year and increase the budget deficit by $54 billion over the next 10 years, the Congressional Budget Office said on Monday.

In its cost assessment of Biden's "Raise the Wage Act of 2021," the non-partisan legislative budget referee agency said that the minimum wage increase also would lift 900,000 Americans out of poverty in 2025.

The CBO said the proposal would increase, on net, the cumulative pay of affected people by $333 billion over the 2021-2031 period but noted that this represented an increased labor cost for firms employing them.

"That net increase would result from higher pay ($509 billion) for people who were employed at higher hourly wages under the bill, offset by lower pay ($175 billion) because of reduced employment under the bill," CBO said in its assessment.

The agency said 17 million workers whose wages would otherwise be below $15 would see their wages rise to that level in 2025, but 1.4 million fewer workers overall would be employed, as some companies will choose to invest more in technology or automation.

"Young, less-educated people would account for a disproportionate share of those reductions in employment," the CBO said.

The CBO said the increase to the budget deficit would come as federal spending rose due to higher prices for goods and services as a result of the wage increase. It cited increased health care costs for Medicaid and Medicare through nursing homes and home health care services, where many workers now earn less than $15 an hour.

The changes also would lead to increased spending on some programs, such as unemployment compensation and reduced outlays on others, such as nutrition aid. Federal revenue on net would rise, it said.

Republicans in Congress have opposed the increase as an undue burden on businesses that would reduce employment.

Reverend William Barber, co-leader of the Poor People's Campaign, said on Monday that raising the minimum wage is as big a fight for minorities as voting rights were in the 1960s.

"No one can claim to want to address racial equity while backing down on $15/hour now for all workers. It is critical for essential workers," the group said in a statement.

Senator Bernie Sanders, a liberal independent who chairs the Senate Budget Committee, said he disagrees with the CBO's conclusions. However, he sees the report bolstering the case for using budget reconciliation rules to pass a minimum wage hike as part of Biden's $1.9 trillion coronavirus aid package with 51 Democratic votes in the Senate.

"CBO has demonstrated that increasing the minimum wage would have a direct and substantial impact on the federal budget. What that means is that we can clearly raise the minimum wage to $15 an hour under the rules of reconciliation," Sanders said.

Biden had said in a CBS interview on Friday that he did not expect the minimum wage plan to be part of the coronavirus package due to Senate rules.

White House Press Secretary Jen Psaki told reporters on Monday that the Senate's parliamentarian had yet to decide whether the proposal could be included in Biden's coronavirus relief package, which is "still working its way through the process in Congress."