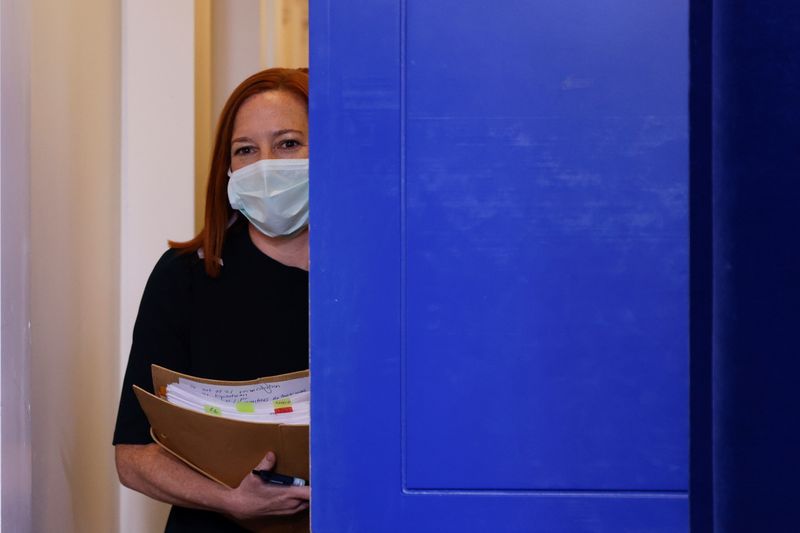 Pskai's comments underscored U.S. President Joe Biden's intention to make human right a key issue in U.S.-Saudi relations, which he pledged during the 2020 campaign to reassess.

Biden on Thursday unveiled a first step in taking a firmer line with the kingdom, announcing an end to U.S. support for offensive operations by the Saudi-led military coalition fighting the Iranian-aligned Houthi movement in Yemen.

Psaki side-stepped a question at a White House briefing on whether the administration would impose sanctions on Saudi Arabia for the 2018 murder of Washington Post columnist Jamal Khashoggi by Saudi operatives in the kingdom's consulate in Istanbul.

Calling Khashoggi's death a "horrific crime," she reiterated the administration's intention to declassify a U.S. intelligence report on the murder, which the CIA assessed was approved - and possibly ordered - by defacto Saudi ruler, Crown Prince Mohammed bin Salman.

The prince denied ordering the murder.

"We, of course, expect Saudi Arabia to improve its record on human rights," Psaki continued. "That includes releasing political prisoners such as women's rights advocates from Saudi jails."

One of the most prominent of those advocates is Loujain al-Hathloul, 31, the leader of a campaign to allow Saudi women to drive, who was arrested in 2018.

Riyadh drew international criticism in December when, according to her family, she was sentenced by a court to nearly six years in prison.

Psaki said the administration was "encouraged" by the release on Thursday of two dual Saudi-U.S. citizens pending their trials.

Bader al-Ibrahim, an epidemiologist and journalist, and Salah al-Haidar, a media commentator whose mother Aziza al-Yousef is a womenâs rights campaigner, were arrested in 2019 on terrorism-related charges.