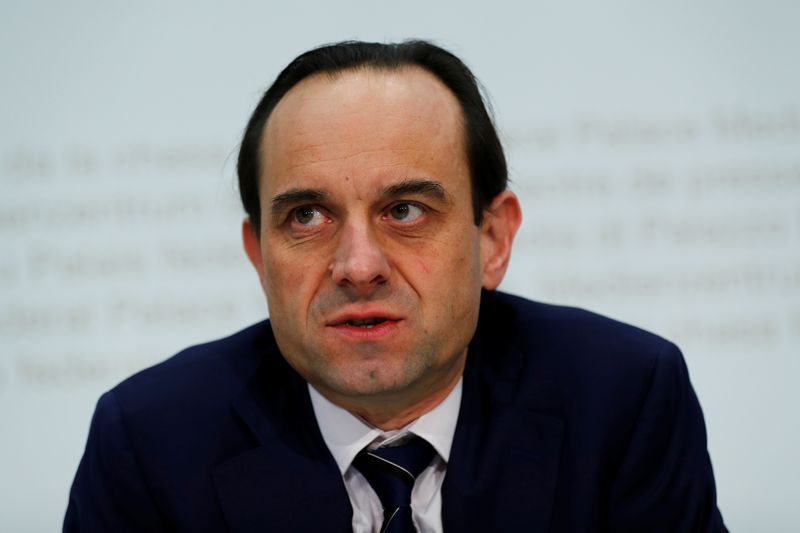 By Tom Sims and John O'Donnell

FRANKFURT (Reuters) - Mark Branson, the head of Switzerland's financial markets regulator, is to become president of Germany's finance watchdog BaFin, the finance ministry said on Monday, as part of a shake-up at the regulator after the Wirecard fraud.

Current BaFin president Felix Hufeld is leaving at the end of the month after coming under pressure for failing to spot wrongdoing ahead of the collapse of the payments company.

The implosion of a former blue-chip hailed as a German success story and once worth $28 billion has embarrassed the government and damaged the country's reputation.

Branson, a banker-turned-regulator, will help give BaFin "more bite", Scholz said. "Trust in Germany's financial centre is important and BaFin is a key factor in that trust."

Fraser Perring, an investor who highlighted wrongdoing at Wirecard only to be investigated himself by BaFin, said reform of the regulator needed to go beyond changing its president.

"It's cultural protectionism and deep rooted," he said, calling into question Germany's willingness to tackle this.

Swiss law, designed largely to shield banks, does not allow FINMA to impose fines, though the regulator can claw back profits from illicit activity.

"Regulation, whether of money laundering or banks, is weak in Switzerland," Rudolf Strahm, an academic and former Swiss lawmaker said. But Branson isn't to blame, he added.

"He was the strictest boss of the regulator that we have seen in Switzerland," Strahm said. "But he did not have the support of the country's politicians."

Calls for Hufeld's resignation came to a head after BaFin in January reported one of its own employees to state prosecutors on suspicion of insider trading linked to Wirecard, shortly before the company folded.

BaFin has more recently faced criticism from German lawmakers and investors in relation to the collapse of Greensill Bank.

Gerhard Schick, finance activist at lobby group Finanzwende and a former member of the German parliament, said: "Hats off!" for the appointment of an expert who also comes from the outside.

"But there is also a mammoth project ahead of Mr. Branson. He has to transform the often sleeping giant BaFin into a strong guardian of the financial markets," Schick said.

Branson, who holds both Swiss and British nationality, became head of FINMA in April 2014 after holding various positions there since 2010. He previously worked at Credit Suisse, SBC Warburg and UBS.

It is still examining whether management control failures at Credit Suisse allowed snooping on former executive board members, many months after the scandal triggered a management overhaul at the bank.

FINMA said Jan Bloechliger, head of its banks division, will take over the operational leadership of the agency from May 1 while it searches for a successor for Branson.