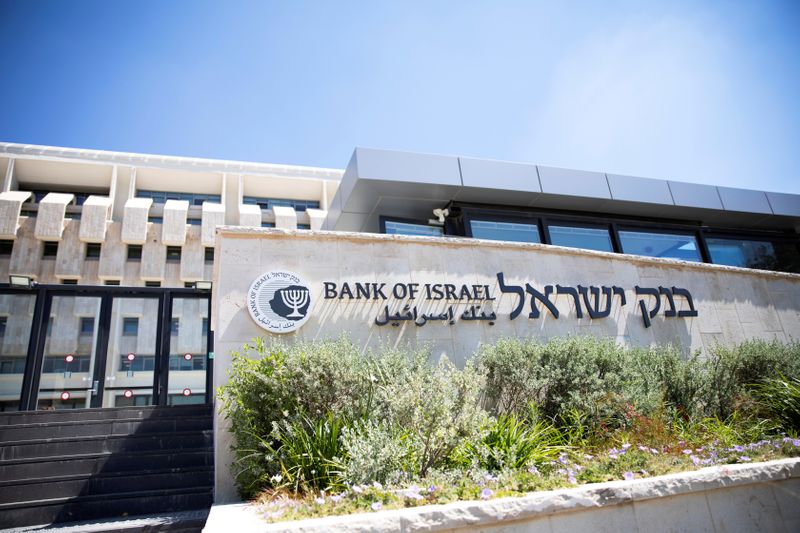 By Steven Scheer and Ari Rabinovitch

JERUSALEM (Reuters) - The Bank of Israel held its benchmark interest rate at 0.1% for an eighth straight meeting on Monday, citing a rapid economic recovery from the COVID-19 pandemic and expectations that inflation will continue to rise.

All 16 economists polled by Reuters had said they expected the monetary policy committee to keep rates steady after doing so ever since cutting them from 0.25% a year ago.

"The opening of the economy and the return to normal life in Israel are expected to support continued rapid growth in the coming year," the central bank said, noting challenges remain regarding the labour market.

"The committee will therefore continue to conduct a very accommodative monetary policy for a prolonged time," and use rates and other tools to support policy targets, it said.

The bank's staff forecast the key rate will stay at 0.1% for the coming year, with economists widely expecting the next move to be a rate increase in 2022 or 2023.

The central bank projects Israel's economy will grow 6.3% in 2021 after a smaller-than-expected 2.6% contraction in 2020 given more than half of Israeli adults are already vaccinated and the economy has largely reopened.

Inflation, which was largely negative in 2020, moved to 0.2% in March from 0.0% in February and the Bank of Israel expects it to reach its official 1%-3% annual target range in May and be 1.1% in the next year.

Bank of Israel Governor Amir Yaron said it was not clear the inflation gain was just a transitory correction. "In any case, this is clearly not an outbreak of inflation," he told a news conference.

In 2022, Israel's economy is expected to grow at a 5% pace and almost fully cancel out the pandemic's impact on economic growth, he said.

Yaron also reiterated that the central bank stands by its plan to buy at least $30 billion of foreign currency in 2021 to stem the shekel's gains. He said that whether the bank expands its bond buying programme beyond a planned 85 billion shekels ($26 billion) would be determined in the coming months.

Central bank officials have expressed reluctance to lower the key rate from an all-time low to zero or into negative territory despite a strong shekel and three lockdowns. Instead, they prefer to use other measures to stimulate the economy such as buying foreign currency and government and corporate bonds.

Yaron urged that when a new government is formed following last monthâs election, it pass a 2021 budget and promote passage of the 2022 budget on time to initiate reforms and long-term investments.