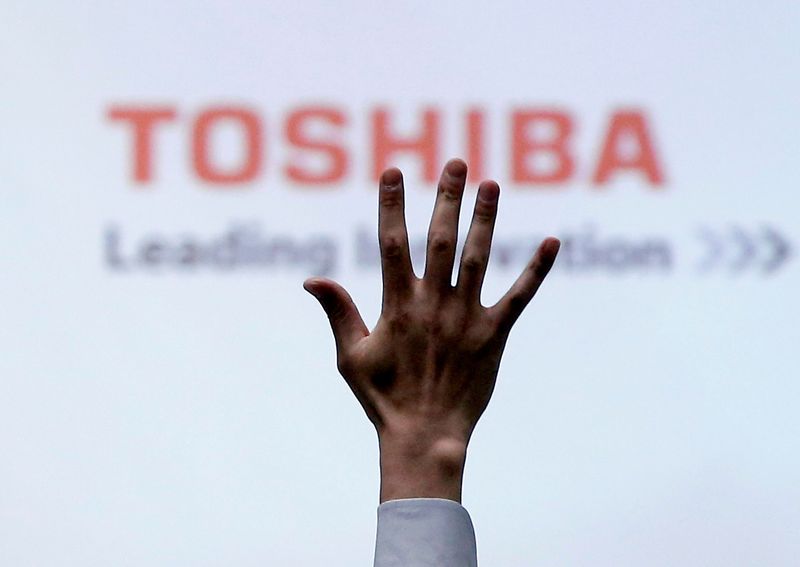 FILE PHOTO: A reporter raises his hand for a question during a Toshiba news conference at the company headquarters in Tokyo, Japan June 23, 2017. REUTERS/Issei Kato/File Photo

By Scott Murdoch and Kane Wu

HONG KONG (Reuters) -Bain Capital is looking at formulating a bid to acquire Toshiba Corp, two people familiar with the matter said, making it one of several firms said to be interested in taking the Japanese conglomerate private.

A preliminary $20 billion buyout offer from CVC Capital Partners this month put Toshiba in play. Toshiba, however, on Tuesday dismissed the CVC bid as lacking in substance although it said it would consider any credible offers.

It is unclear whether Bain will team up with co-investors but the sources did not exclude the possibility.

CVC approached Bain about a joint bid before its offer was made public but Bain was not interested, the first person said.

In 2017, it led a consortium with partners including South Korean chipmaker SK Hynix and Apple Inc to win an intense and long-fought battle for control of Toshiba's chip unit, now called Kioxia Holdings. Toshiba retains around 40% of Kioxia.

Bain's plans for a Toshiba bid are preliminary and could change, said the sources, who declined to be identified as the information was confidential.

Toshiba said it believed that being publicly traded provided a "capital structure suitable for enhancing long term value creation" but added that its board would not disregard various proposals, including those to take the company private.

CVC is not expected to aggressively pursue its bid. In an April 18 letter to Toshiba seen by Reuters it said it would stand by its April 6 proposal but that it would not make a tender offer without consent from Toshiba's board.

"...we respectfully step aside to await your guidance," the letter said.

CVC's proposal had sparked a strong backlash from Toshiba managers, prompting them to lobby the government and its lenders against it, sources have said.

Toshiba CEO Nobuaki Kurumatani this month resigned over the proposal from CVC, his former employer, amid criticism the offer, which promised to retain management, was designed to shield Kurumatani from activist shareholders.

Any buyout of the company, which has a market value of $18 billion, would be the largest such deal in the region this year and one of Japan's biggest.

Hit by accounting scandals, huge writedowns for its U.S. nuclear business and the sale of its semiconductor unit, Toshiba is a shadow of its former self.

But it remains one of Japan's few manufacturers of nuclear power reactors and makes defence equipment including lithium-ion batteries for submarines, meaning any sale of Toshiba would need government approval.

Toshiba shares pared earlier losses to close down 3.3% on Wednesday, marking their fourth consecutive day of decline. The stock price is still up 10% from April 6, a day before it was announced that the company was considering CVC's offer.