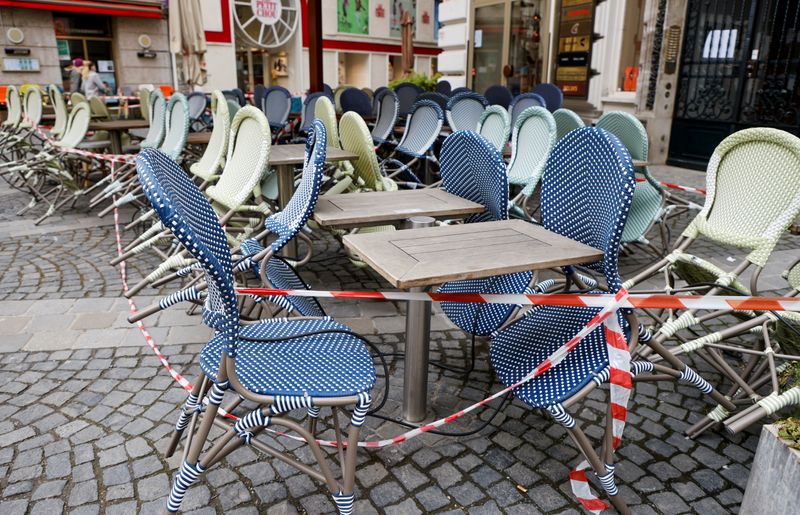 Tables and chairs are seen next to a closed restaurant as the coronavirus disease (COVID-19) lockdown continues in Vienna, Austria March 22, 2021. REUTERS/Leonhard Foeger

VIENNA (Reuters) -Austria has postponed the reopening of cafe, restaurant and bar terraces planned for March 27 due to rising coronavirus cases and is preparing for regions to adapt restrictions locally, the government said on Monday.

The number of new infections reported rose above 3,500 on Friday, the highest level since early December, when cases were falling during the second national lockdown.

The government met with the governors of its nine provinces on Monday to review its plan to let terraces reopen next weekend in all but one of them, after the small Alpine province of Vorarlberg got a head start earlier this month.

"The experts have advised us not to carry out any more loosening of restrictions here, unfortunately," Chancellor Sebastian Kurz said of most provinces.

Last week the hardest-hit provinces were Vienna and the province surrounding it, Lower Austria, as well as Burgenland, which borders Hungary. The latest government data https://covid19-dashboard.ages.at/dashboard.html now shows other provinces have joined them at the top of the table in terms of infection rates and intensive care bed use.

Kurz said the three eastern provinces had "a problem" because of the high level of more contagious coronavirus variants and their proximity to eastern European countries with high infection rates.

"The provinces in the east proposed that they work on measures here to counter this and flatten this trend that we have in intensive care units," Kurz said.

A government source said loosening restrictions could happen in some regions after Easter, which is at the start of April, if the intensive care figures are stable.