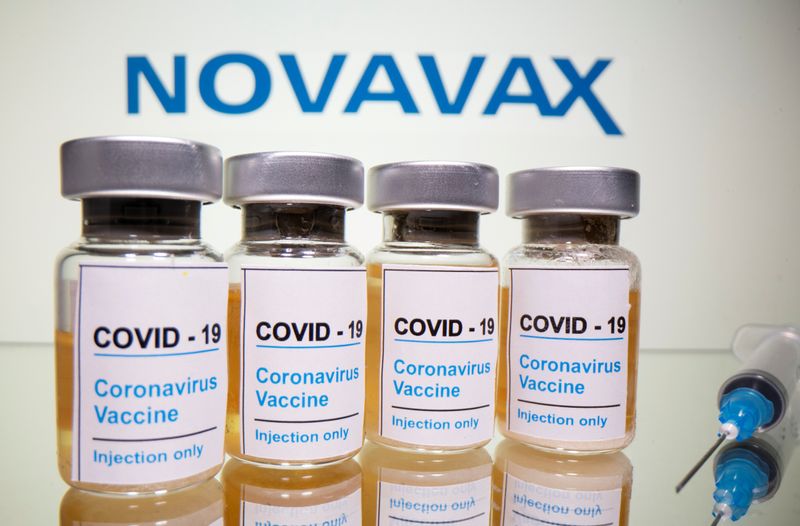 FILE PHOTO: Vials with a sticker reading, "COVID-19 / Coronavirus vaccine / Injection only" and a medical syringe are seen in front of a displayed Novavax logo in this illustration taken October 31, 2020. REUTERS/Dado Ruvic/Illustration

By Renju Jose and Colin Packham

SYDNEY (Reuters) - The Australian government has agreed to purchase two more COVID-19 vaccines in development, beefing up the country's prospective arsenal against the pandemic to 135 million doses as it aims to complete a mass inoculation programme within months.

That adds to the 85 million doses Australia has already committed to buy from AstraZeneca (NASDAQ: AZN) and CSL Ltd (NYSE: CSL) should trials prove successful, taking the country's total anticipated outlay to A$3.2 billion ($2.3 billion).

"We aren't putting all our eggs in one basket," Morrison told reporters in Sydney.

Health Minister Greg Hunt said the Novavax and Pfizer-BioNTech vaccines, which will be manufacturd in the United States and Europe, would complement the AstraZeneca and CSL products, which would be manufactured in Australia.

"That means we are now in a very strong position with the portfolio of four different vaccines, two protein, one viral vector and one MRMA, which is the Pfizer vaccine, and that's innovative - the world hasn't had an MRMA vaccine before," Hunt told TV broadcaster Nine Network.

The Pfizer-BioNTech, AstraZeneca and Novavax vaccines are considered to be among the leading candidates in the global race to receive regulatory approval.

Should trials prove successful, Australia expects to receive the first batches of the AstraZeneca vaccine in early 2021 and begin a mass rollout in March to be completed by the end of the year.

If all four vaccines come to market, Australia and its population of 26 million people will find itself with excess doses, even allowing for the fact that many of the candidates in development require two doses to be effective.

Australia has said it plans to donate any excess doses to Pacific Island countries and has committed to spending around A$525 million to ensure Pacific nations and East Timor achieve full immunisation coverage.

Australia is the largest aid donor to the Pacific islands and has sought in recent months to step up its engagement out of concern it risks being overshadowed by Chinese aid and financial support.

The announcement of the new planned vaccine purchases came as Australia recorded no cases of locally transmitted COVID-19 over the past 24 hours for the second time in a week. The country on Sunday recorded the first day without any local cases since early June.

Australia has reported just over 27,600 coronavirus cases and 907 deaths, far fewer than most other developed countries thanks to extensive testing, contact tracing and lockdowns.

As national case numbers have slowed slowed to fewer than 10 each day, states and territories have been reopening borders and relaxing differing levels of social distancing restrictions.

The national carrier will go from the ten return flights it is currently operating each week between Sydney and Melbourne to more than 250 flights between the two states weekly. The Sydney-Melbourne route was one of the busiest in the world before the pandemic.