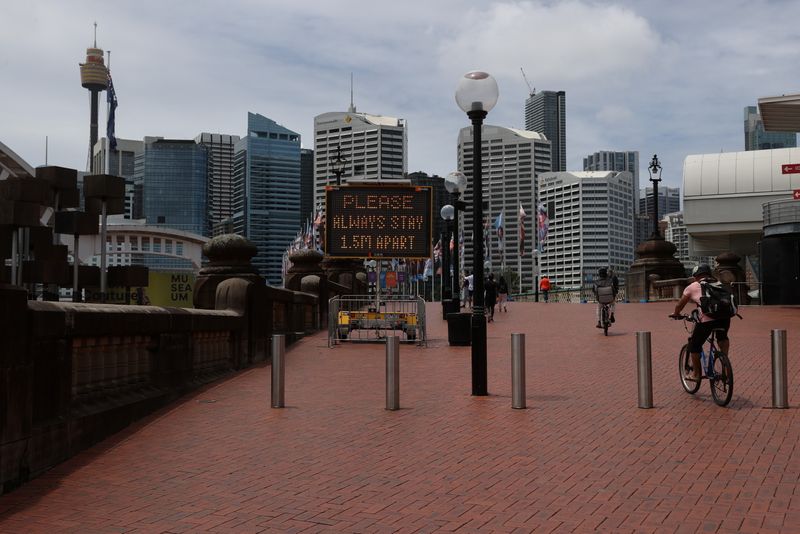 FILE PHOTO: A public health warning message is posted amidst the tightening of regulations to curb the spread of the coronavirus disease (COVID-19) in Sydney, Australia, December 30, 2020. REUTERS/Loren Elliott

MELBOURNE (Reuters) - Australia may resume its travel bubble with New Zealand in coming days, its health minister said on Friday, as the state of Victoria eased border controls ahead of hosting the first tennis Grand Slam on 2021, the Australian Open.

Health officials are reassessing daily a pause on Australia's travel corridor with New Zealand after the Pacific nation's strong response to an outbreak of a contagious strain of COVID-19, while borders between Australia's two most populous states may next week open freely for the first time this year.

The trans-Tasman bubble, which has allowed New Zealand residents to travel to Australia without quarantining, was frozen after New Zealand confirmed its first case in months on Monday of a variant that emerged in South Africa.

Evidence that it has contained the worrying spread, with zero cases of community transmission on Friday, have meant there is reason for health officials to reconsider the travel pause, Australia's Health Minister Greg Hunt told media.

"If there are continued excellent results out of New Zealand, which is commensurate with their entire performance over the course of the pandemic, then we hope to be in a position to resume (travel) in the coming days," said Hunt.

New Zealand and Australia both ranked in the global top 10 in an index of almost 100 countries based on their containment of the coronavirus, which has paved the way for the state of Victoria to stage the Australian Open starting Feb. 08.

The state Victoria began relaxing month-long travel restrictions on visitors from Sydney on Friday, as the world's top tennis talent emerged from 14-day hotel quarantine in Melbourne and neighbouring Adelaide which was hosting a show tournament.

"These 14 days, there wasn't a day that I didn't have someone under the balcony, with a Serbian flag, and I want to thank them all for making the stay in the hotel much easier for me and my team," Novak Djokovic told media in Adelaide.

Australia has recorded nearly a fortnight free of community transmission with authorities bringing an outbreak that began before Christmas in the most populous New South Wales state under control.

Australia logged 5 new cases on Friday, all in overseas travellers in quarantine, bringing total cases to around 28,800 with 909 deaths since March.