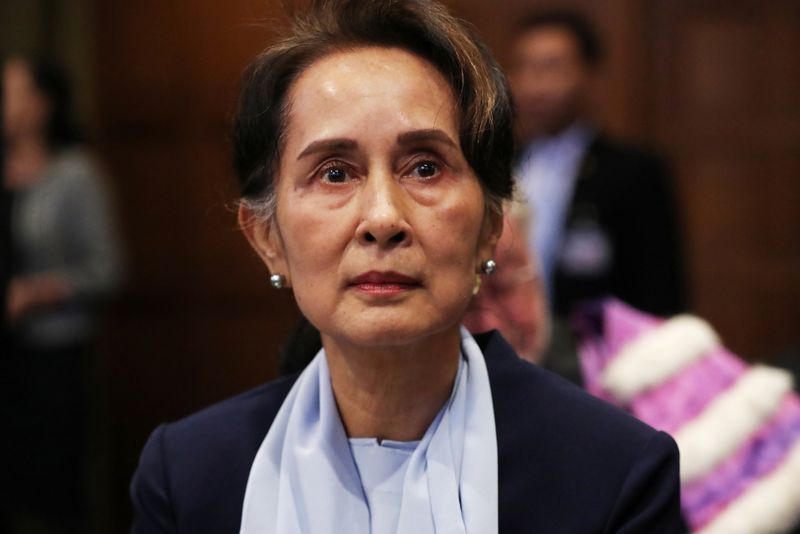 FILE PHOTO: Myanmar's leader Aung San Suu Kyi arrives at the International Court of Justice (ICJ) for the second day of hearings in a case filed by Gambia against Myanmar alleging genocide against the minority Muslim Rohingya population, in The Hague, Net

June 19, 1945: Suu Kyi, daughter of Myanmar's independence hero General Aung San, is born. Her father is assassinated when she is two years old.

1988: She returns from Britain to Myanmar to care for her dying mother and is swept up in nationwide protests against decades of military rule.

1989: Having crushed the protests and killed thousands, the military puts Suu Kyi under house arrest.

1991: While detained in her lakeside home in Yangon, she wins the Nobel Peace Prize.

1995: She is released and regularly speaks to large crowds outside her gates.

1999: Her husband, British scholar Michael Aris, dies of cancer. Suu Kyi chose not to leave Myanmar to see him in case the junta blocked her return.

2003: Pro-junta thugs attack her and kill several of her supporters.

2007: A dramatic rise in fuel prices triggers anti-government protests led by Buddhist monks called the "Saffron Revolution". Flanked by riot police, Suu Kyi briefly greets monks at the gates of her home, energising the demonstrations, which are soon quashed by the military.

2010: A party created by the military wins a general election by a landslide. Suu Kyi's party, the National League for Democracy (NLD), boycotts the poll, saying the laws governing it are "unjust".

2012: Most Western sanctions on Myanmar are scrapped, as Thein Sein lifts censorship, frees hundreds of political prisoners and launches a series of reforms.

May 2012: Suu Kyi takes her place in Myanmar's parliament in the capital, Naypyitaw.

Early June 2012: Clashes between Rakhine Buddhists and Rohingya Muslims in Rakhine state kill at least 80 people. Thousands of homes are burned down. With parts of the state capital Sittwe still smouldering, Suu Kyi departs on a five-nation tour of Europe.

Nov. 2015: The NLD wins a general election by a landslide and Suu Kyi assumes power in a specially created role of state counsellor.

Sept. 19, 2017: Suu Kyi addresses the Rakhine crisis in a speech in Naypyitaw, saying military operations are over, as Rohingya flee and villages burn. She faces mounting international criticism for her response to the crisis.

Nov. 13, 2018: Amnesty International withdraws its most prestigious human rights prize from Suu Kyi, accusing her of perpetuating human rights abuses by not speaking out about violence against the Rohingya.

Jan. 29, 2019 - NLD clashes with military lawmakers as it proposes steps towards changing the constitution, its biggest challenge in nearly three years to the army's power over politics as enshrined in the charter.

Dec. 2019: After a three-day hearing, Suu Kyi calls on World Court judges in The Hague to dismiss an accusation of genocide against the Rohingya brought by Gambia.

Jan 23, 2020: The International Court of Justice orders Myanmar to take urgent measures to protect its Rohingya population from genocide, in a preliminary decision on the charges brought by Gambia.

Nov. 13: The NLD said it would seek to form a government of national unity after official election results showed it had comfortably won enough parliamentary seats to form the next administration. The main opposition, the military-backed Union Solidarity and Development Party (USDP), alleges irregularities and demands a re-run.

Jan. 28: The election commission rejects allegations of vote fraud, saying there were no errors big enough to impact the credibility of the vote.

Feb. 1: Suu Kyi, President Win Myint and other senior figures from the ruling party are detained in an early morning raid that the military said was a response to "election fraud".