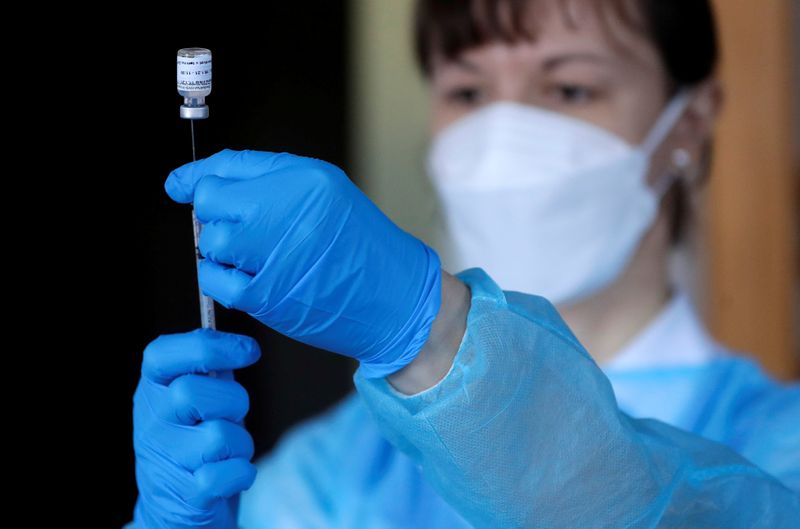 FILE PHOTO: A member of a mobile vaccination team prepares a shot of the coronavirus disease (COVID-19) vaccine at the Home of Holy Family, for people with mental disabilities of welfare organisation Caritas, in Prague, Czech Republic, January 13, 2021.

PRAGUE (Reuters) - AstraZeneca has asked the Czech authorities about possible demand for more vaccine later this year, but any supplies would have to comply with European Union agreements, the company and Czech Health Minister Jan Blatny said on Monday.

A Czech news website reported on Saturday that the Czech Health Ministry was in talks with the company on extra supplies in addition to the 3 million already ordered, but it was not clear if these would be compliant with the country's EU commitment not to negotiate separately.

Vaccine supplies have been an explosive topic in Europe after producers cut back shipments.

Blatny said many or all European Union countries had been contacted by the company to gauge interest in supplies in the second half of this year under existing agreements with the EU.

"It is in no way the ministry's intention to act at variance with these contracts," he told a news conference.

AstraZeneca's Health Care Affairs Director for the Czech Republic and Slovakia Jarmila Doleckova told Reuters the company was enquiring about preliminary interest in supplies on top of the 300 million doses agreed with the European Commission, which would fall under an optional 100 million increase.

"The current agreement with the EU allows for an additional increase by further 100 million doses," she said in an emailed response to Reuters questions.

"This question was thus raised so we could, in case of interest, secure in advance sufficient production capacity in the second half of 2021."