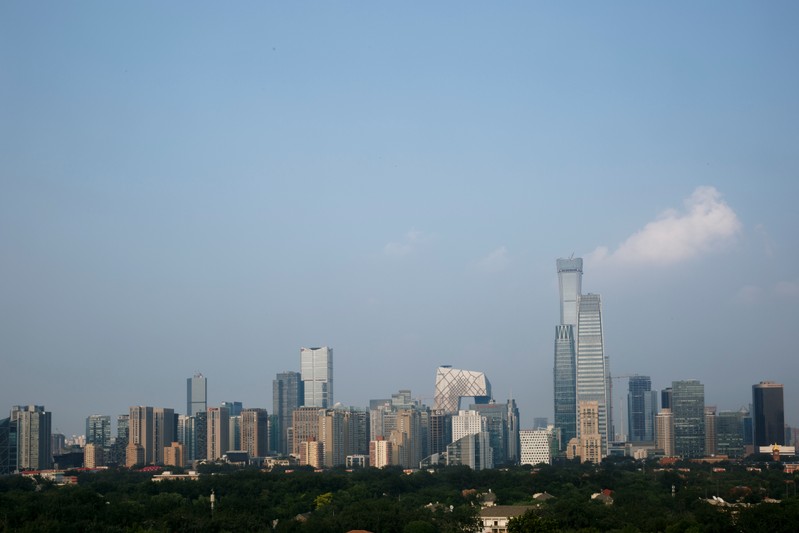 By Samuel Shen and Kevin Yao

In the latest of a slew of measures to woo overseas capital, China on Tuesday scrapped the limits on two key inbound investment schemes, even though two-thirds of existing quotas under the scheme remained unused.

Also reflecting desperation for overseas funding are authorities' ramped-up charm offensives to court global executives, and there are plans for a series of conferences targeting Fortune 500 companies.

"Stabilizing foreign investment will help stabilize the economy, and that will have a direct impact on the exchange rate," a senior Chinese policy advisor told Reuters.

China's yuan currency plunged below the key seven-to-dollar level last month to an 11-year-low as trade frictions intensified. The currency has declined over 5% since May.

Wooing global investors has become a priority for China since the outbreak of the debilitating trade war last year. U.S. companies, in particular, have become the focus of a tug of war between Beijing and U.S. President Donald Trump, who has exhorted American firms to leave China.

The advisor, who declined to be identified, brushed aside Trump's "pull-out" directive as "wishful thinking", arguing that foreign investors would gravitate toward China's huge market potential and massive consumer base.

But the steady decline in both China's trade surpluses and direct mainland investments by foreign companies show why Beijing should be pursuing foreign money.

Higher tariffs and growing protectionism mean China will get less and less dollar proceeds from trade, said Wang Peng, an economist at China Development Securities. "If you want to keep a high level of investment in China, you need foreign inflows."

It's an uphill battle.

Since China's entry into the World Trade Organization in 2001, foreign money has poured into the fast-growing export powerhouse, keeping the yuan on an uninterrupted uptrend for more than a decade while inflating the country's forex reserves.

But that trend has changed, and China is now staring at possible deficits in both its capital and current accounts.

China's surplus in the current account, which includes mainly trade in goods and services, has been shrinking every year since 2015, hitting a 15-year-low of $49.1 billion last year.

Cary Yeung, Head of Greater China debt at Pictet Asset Management, said it's natural for China to turn into a net importer of capital as it reduces economic reliance on exports, consumes more and therefore runs a current account deficit.

"When that happens, the country will have to finance that deficit by borrowing more from abroad."

Aware of this looming challenge, Beijing is doubling down on its efforts to lure portfolio inflows and open up its vast financial sector.

Tuesday's scrapping of quotas on the two schemes - known as QFII and RQFII - is on top of drastic reforms that led to global index publishers such as MSCI and FTSE Russell agreeing to add China stocks and bonds into their global benchmarks.

Growth in the stickier foreign direct investment (FDI), however, has been trending lower. Net FDI, as per Nomura estimates, will more than halve this year to $40.3 billion.

Ben Cavender, Managing Director of consultancy China Market Research Group (CMR), said that although it would take time for big global firms to diversify part of their capacity out of China if the trade war drags on, smaller players will more likely shut their China business.

"Any time you have government policy frictions like this, it tends to slow down FDI and so I think that's the reality. The other reality is that the Chinese economy is slowing down, and so is the return on investment," he said.

In another worrying sign, despite China's draconian capital controls, China's net errors and omissions - or unaccounted capital outflows - surged close to record levels at $87.8 billion in the first quarter. Some economists see it as a sign that money is illegally fleeing in increasingly "innovative" ways.

A surge in capital flight would put further downward pressure on the yuan, potentially triggering a vicious circle, although most economists see little risk of a serious Latin-American style balance of payments crisis in the world's second-biggest economy.

Cheng Shi, chief economist at ICBC International, says China's gigantic domestic market is still a haven in a world of turbulence, with huge potential in its consumer and new-economy sectors.

"Therefore, long-term money, rather than leaving China, could double down on their bets on the country amid short-term volatility."