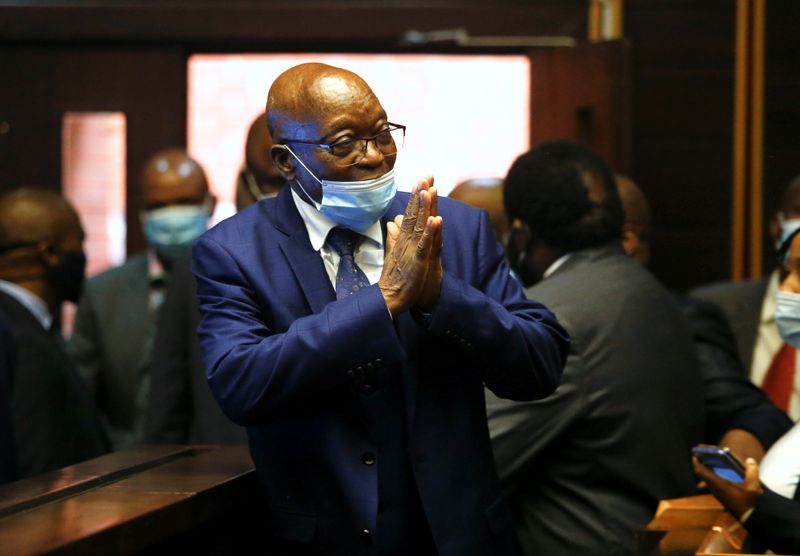 South Africa's former President Jacob Zuma, who is facing fraud and corruption charges, greets supporters in the gallery of the High Court in Pietermaritzburg, South Africa, May 17, 2021. REUTERS/Rogan Ward

The trial of Zuma, 79, had been expected to begin on Monday but was delayed again after his newly appointed defence team raised concerns over the lead prosecutor and said it might seek his recusal from the case.

Zuma defence lawyer Thabani Masuku told the Pietermaritzburg High Court that a plea application of not guilty would be entered when the court next hears the case on May 26.

The case takes place as an anti-graft crackdown led by his successor as president, Cyril Ramaphosa, gathers pace and the governing African National Congress is beset with infighting as top officials accused of corruption fight back.

The bespectacled Zuma, dressed in a blue suit and tie, looked relaxed in court and gave the thumbs up and waved to supporters. Among those in court was suspended ANC Secretary-General Ace Magashule, a Zuma loyalist, while a crowd of supporters waving the green, gold and black ANC flag sang Zuma's praises outside the court.

Sacked as deputy state president in 2005 after his former financial adviser, Schabir Shaik, was jailed for corruption in the same arms deal, Zuma swiftly regained political power and spent almost a decade as president before a judge reinstated the case in 2018.

Zuma is accused of accepting 500,000 rand ($35,000) annually from Thales from 1999 as a bribe, in exchange for protecting the company from an investigation into the deal following whistle-blower revelations by a lawmaker in parliament that same year.

The alleged bribe forms part of a broader corrupt relationship the state argues existed between Zuma, Shaik and his firm Nkobi Group, as well as Thales. Nkobi Group was the local joint venture partner to Thales, then known as Thompson-CSF, which was part of a consortium that won a 2.6 billion rand bid to provide combat suites for new navy frigates.

Zuma, who was acquitted on a 2005 rape charge where he admitted having unprotected sex with his HIV-positive accuser, currently faces 18 charges, including racketeering, corruption and fraud. Zuma, who has said the arms deal case is politically motivated, and Thales have consistently denied any wrongdoing.

""You can't have a case for so many years. That the charges keep changing and changing. But I don't want to say too much, we will say what we have to say in court." Zuma told supporters outside the court, before leading them in singing his trademark Umshini wam' (bring my machine gun) anti-apartheid struggle song.

The trial is expected to last from May until June, the court has said previously, with more than 200 witnesses lined up for the state.