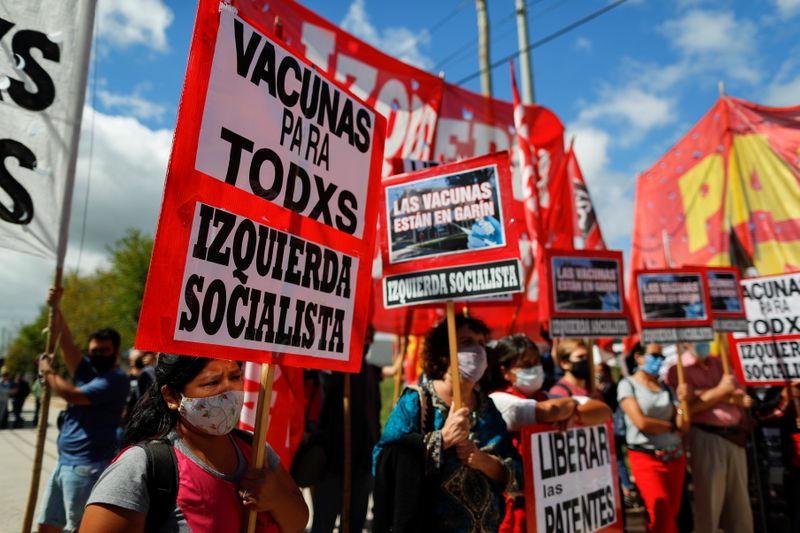 Leftist groups protest outside the mAbxience laboratory to demand its expropriation, amidst the coronavirus disease (COVID-19) outbreak, in Garin, on the outskirts of Buenos Aires, Argentina March 29, 2021. The placard reads: "Vaccines for all". REUTERS/A

BUENOS AIRES (Reuters) - An Argentine far-left workers group protested on Monday outside local vaccine market mAbxience, which is producing the Oxford University/AstraZeneca COVID-19 drug for the region, criticizing delays to doses being available in the country.

Around 50-100 people, organized by the Workers' Left Front-Unity alliance, protested with banners reading "vaccines for all" outside the plant in the GarÃ­n neighborhood of Buenos Aires, which is making the vaccine's active ingredient.

Argentina's vaccine rollout has been mired by delays, raising tensions over access to inoculations which resulted in the resignation of the health minister in February over a "VIP vaccine" scandal. The country now faces a potential third wave of coronavirus cases.

The country had bet on the AstraZeneca Plc vaccine, which is being produced by mAbxience and Mexican laboratory Liomont. The latter has faced production delays, and there have been reports of some doses being stockpiled or sent out of Argentina.

Juan Carlos Giordano, the national deputy for the leftist worker alliance, said the group was demanding the state take control of the vaccine maker.

"We have presented a bill to declare it a public utility and to have massive national production with all public and private laboratories to make millions of doses for the most vulnerable in Argentina and Latin America," he said.

Spain's Insud Pharma group, which owns mAbxience, did not immediately respond to a request for comment.

The protest, while by a fringe group and unlikely to truly sway the government, underscores rising anger over access to vaccines in Argentina and beyond as Latin America faces a surge in cases ahead of the Southern Hemisphere winter.

Argentina's center-left ruling Peronist alliance includes influential, hard-left groups, who have been gaining a louder voice in recent months in relation to debt talks with the International Monetary Fund and diplomacy over Venezuela.

Some protesters on Monday carried banners saying "No to the IMF, vaccines for all."

The leaders of the protests, citing unconfirmed reports, said vaccine doses were being hoarded within Argentina and that others had even been sent to the United States.

Argentina's government did not immediately respond, but a government official, speaking on condition of anonymity, previously denied doses had been sent to the United States.

"It seems to us that the vaccine is a matter of life or death, so the government should declare it a public utility with the right of expropriation," said Vilma Ripoll, leader of the leftist alliance.