Archbishop of Santiago Chile hospitalized after testing positive for COVID-19 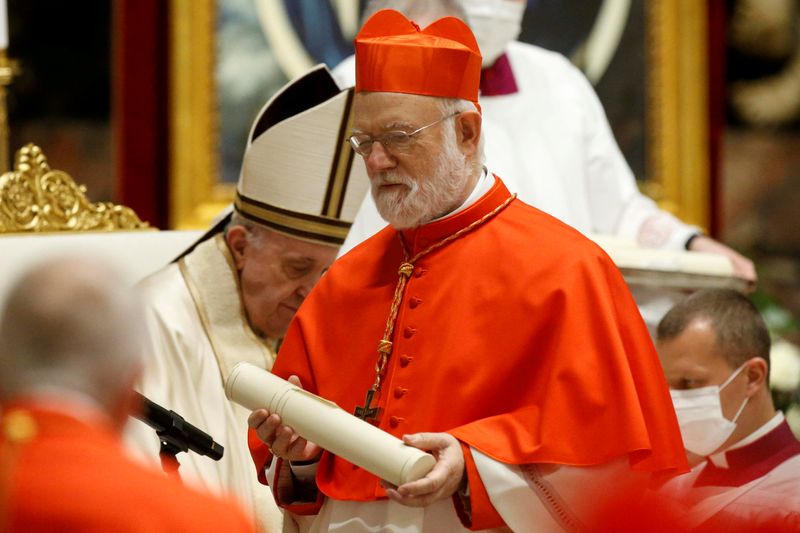 FILE PHOTO: Spanish-born Celestino Aos Braco of Chile receives his biretta as he is appointed cardinal by Pope Francis, during a consistory ceremony at St. Peter's Basilica at the Vatican, November 28, 2020. Fabio Frustaci/Pool via REUTERS/File Photo

SANTIAGO (Reuters) - The archbishop of Chile's capital Santiago, Celestino Aos, has been hospitalized after testing positive for the coronavirus, the Roman Catholic Church in Chile wrote in a statement posted on Twitter on Saturday.

Aos, 76, and Monsignor Alberto Lorenzelli, the auxiliary bishop of Santiago, were confirmed by the church as having tested positive for COVID-19 earlier this week.

Both had received two doses of the Sinovac vaccine being administered by the Chilean health authorities, the church said, with the second dose administered on March 11.

The church said in its Saturday statement that Aos was admitted to a university hospital in the capital "on medical advice and in a preventive manner".

"Although the effects of the disease are moderate, they need to be addressed with specialized equipment to avoid possible complications," the statement said, adding that Lorenzelli's condition had not changed.

A recent study by the University of Chile of national vaccination data and contagion rates suggested that the Sinovac vaccine was 54% effective at preventing coronavirus contagion two weeks after two doses are administered.

A broader, real-world study of the efficacy of the Sinovac and Pfizer vaccines being administered in Chile's rapid mass vaccination campaign will be published in the coming week by the government.

Aos, who is from Spain, was appointed Santiago's archbishop by Pope Francis in December 2019 as the Vatican sought to turn the page on a sexual abuse scandal that has shaken its standing and eroded support in the conservative Latin American nation.