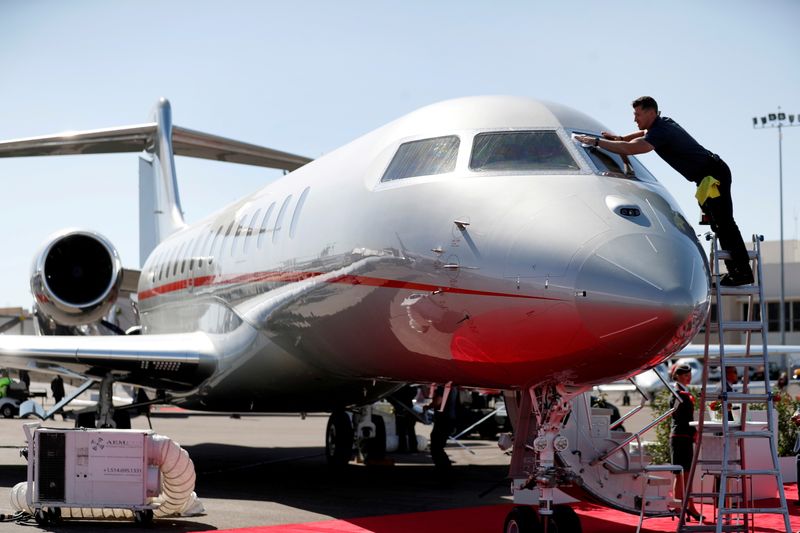 LAS VEGAS (Reuters) - Private jet demand has boomed during the pandemic as the wealthy took control of their travel, yet the flight to luxury could have limited runway as some buyers spend beyond their means and the sector presents a prime target for climate critics.

It's a boon for publicly traded corporate planemakers who are increasingly selling aircraft without the discounts that had become pervasive after the industry fell from favor in the 2008-2009 financial crisis.

General Dynamics Corp's Gulfstream Aerospace, Bombardier, Textron and Dassault Aviation are leaders by value of deliveries, which supplier Honeywell values at $238 billion over the next decade.

"I'm hearing from people every day who are interested in getting into private aircraft," said Stephen Hofer, president of Aerlex Law Group, which does aircraft transactions.

But the influx of new entrants, often wealthy individuals and families who upgraded their travel from first-class airline tickets during the pandemic, brings some new risks.

One veteran broker described a new buyer who had purchased a plane at prices he could only afford by leasing the aircraft for part of the time to other travelers. If leasing demand wanes, the buyer could have difficulty paying for the jet, warned the broker who spoke candidly on condition of anonymity.

"These are people who have never got a $1 million maintenance bill before," said the broker, adding such practices are reminiscent of market activity before the 2008 crash.

Still, U.S. business jet flight hours rose 16% during early October compared with October 2019, itself the strongest month for activity since 2008, according to consultancy WingX.

And many executives, analysts, aviation lawyers and brokers are confident the rebound will continue into 2022.

"The activity rebound in 2021 is increasingly being seen as a green light for faster industry growth the next few years, not just a one-off bounce from the pandemic," said WingX Managing Director Richard Koe.

One unknown quantity is the amount of business-related travel, which is expected to take longer to recover than the leisure trips that underpin domestic U.S. airline traffic.

But some companies are backing away from travel and setting "carbon budgets" to reduce pollution, in a move that would weigh on airlines' business class and corporate jets, which generate more emissions per passenger.

The industry is also battling to fend off questions over its environmental record. It hit the headlines recently when Prince Harry and Meghan Markle drew media criticism for using private jets despite their stance on climate change.

Investors in the industry want it to tackle the issue.

Kenneth Ricci, principal of Directional Aviation Capital, a private investment firm that funds and owns business aviation companies, warned that corporate aviation must take action on the environment or risk having it used against the industry.

"My biggest concern, the one I'm watching all the time is what we're going to do on sustainability," Ricci told a lunch event at the NBAA show. "We need to be vocally ahead of this."

"If the sector wants to reach zero emissions, it should accept governments mandating the use of clean technologies and taxing wealthy private jet users to finance their deployment."