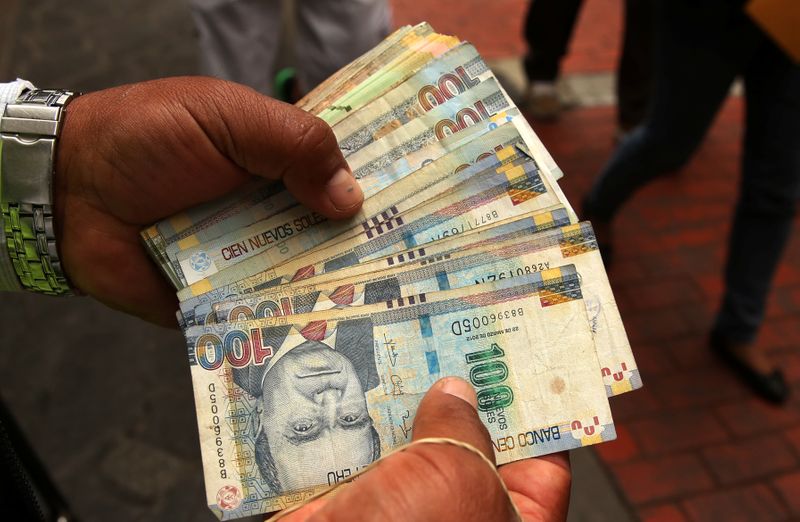 LIMA (Reuters) - Uncertainty around Peru's presidential elections next month is heightening concern over the country's sol currency, compounding wider emerging market jitters among investors and dragging the tender to a record low against the dollar.

The sol has edged above 3.7 per greenback, losing some 12% of its value against the dollar since the start of last year, despite heavy central bank intervention. Investors see it weakening further ahead of the April 11 first-round vote.

"There is room for the exchange rate to rise a bit more," the chief economist for Peru at BBVA bank Francisco Grippa told Reuters late last week.

To be sure, currencies around Latin America have been suffering of late amid wider emerging market wobbles, some worse off than the sol.

But, Peru's upcoming ballot is adding an extra risk after the Andean country plunged into political crisis last year, resulting in an odd scenario that saw three presidents in just over a week. There is no clear favorite to win the presidency and many Peruvians remain undecided.

The top candidates for the election include populist Yonhy Lescano, who has spoken out against major copper miners, leftist VerÃ³nika Mendoza, and centrist ex-soccer goalkeeper George Forsyth. But none has much over 10% of the vote, current polls show.

"The elections are still open, leaving room for last-minute shifts within top contenders," Citi wrote in a note. Polls predict no clear winner and a second-round run-off on June 6. Peru is the world's no. 2 copper producer.

"This suggests to us that downside in Peruvian asset prices is still very plausible. We would likely only consider buying Peru closer to the election, when the risks are clearer, especially in the current unsettled emerging market environment."

Many Peruvians are fed up with the political establishment after years of corruption, which sparked a period of deadly riots last year and calls for broader constitutional change.

The markets are watching policies on mining, the recovery from one of the world's worst coronavirus-related economic contractions, and whether monetary policy is kept stable.

"The choice of central bank president by the new government is a key factor to monitor, with a view to the monetary stance in the coming years," said Carlos Prieto, manager of Economic Studies at BCP bank, the largest in the country.

Lescano said last month he wanted to make the state the ultimate owner of resources in the country to get better prices for the country's key export, copper. Mendoza has pledged to rewrite the country's constitution, review Peru's free trade pacts and fire the central bank's current head, Julio Velarde.

Forsyth says he will look to maintain macroeconomic stability and create a "mining trust" to ensure royalties.

The bank in the last week sold some $131 million in the spot FX market and issued exchange swaps for 8.8 billion soles ($2.38 billion), one of the highest interventions of the year.

Analysts estimate that after the election and as the vaccination program against COVID-19 ramps up, the sol should strengthen to close the year in a range of 3.45-3.50 per dollar.

BBVA's Grippa added that candidates may also moderate their positions and policies as they advance.

"It has already happened before these proposals are moderated when they go to the second round, they begin to move more into the center," said Grippa.