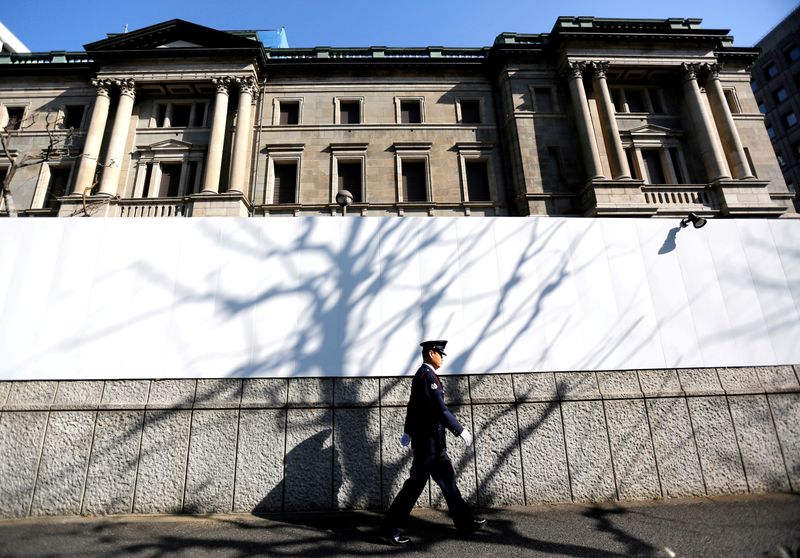 FILE PHOTO: A security guard walks past in front of the Bank of Japan headquarters in Tokyo, Japan January 23, 2019. REUTERS/Issei Kato

TOKYO (Reuters) - As the coronavirus pandemic stokes fears of deflation, the Bank of Japan is facing changes in its board that could tip theãbalance in favour of aggressive monetary easing and test the limits of its already stretched policy tool-kit.

Parliament approved on Wednesday the government's nomineeãAsahi Noguchi, an academic known as a vocal advocate of heavyãmoney printing, to join the BOJ's nine-member board in April.

He succeeds Makoto Sakurai, who has warned of the rising cost of prolonged easing, when his five-year term ends in March.

The central bank has no immediate plan to exit ultra-loose monetary policy as the hit to the economy from the coronavirus pandemic pushes inflation further away from its 2% target.

But the bigger presence of doves may complicate the BOJ'sãongoing strategy to gradually slow asset purchases and make itsãpolicy sustainable enough to endure what will be a long-termãbattle to spur growth, say sources familiar with its thinking.

"The risks of ramping up stimulus are clear. But with a bigger presence, the (doves) would have a stronger say over the BOJ's policy priorities," one of the sources said.

"While it may not immediately affect policy moves, numbers do matter," another source said on condition of anonymity due to the sensitivity of the matter.

For a graphic on the BOJ's new board composition and its challenges, click

As an academic, Noguchi has preached the benefits of "ModernãMonetary Theory" (MMT), a controversial theory floated by someãU.S. academics for central banks to print money unlimitedly toãbank-roll government debt.

"There are elements of MMT that's acceptable to mainstream (academics) without any change ... and where the mainstream can actively learn from," he wrote in a magazine column in 2019.

Noguchi declined a request by Reuters for an interview.

The addition of Noguchi would leave four of the BOJ board's nine seats in the hands of the reflationists, giving them power to push back against the governor's proposals if there is just one swing vote.

That heightens the importance of the government's choice of a successor to Takako Masai, a former market analyst who has taken a neutral stance policy, when her term expires in June.

Split votes are rare at the consensus-favouring BOJ. But big policy shifts have recently led to a narrow 5-4 vote including the BOJ's decision to adopt negative interest rates in 2016.

"Noguchi's nomination is a sign the government wants the BOJ to keep its money spigot wide open," said Izuru Kato, chief economist at Totan Research and a long-time BOJ watcher.

The challenge for the doves would be to iron out their differences and come up with ways to spur growth, which is no easy task given the BOJ's depleted policy arsenal.

In recent decisions, former economist Goushi Kataoka has been a sole dissenter to keeping policy steady on the view the BOJ must take stronger steps to fire up inflation.

Others in the reflationist-camp have not joined Kataoka, with some signalling that fiscal policy should play a dominant role in pulling the economy out of the doldrums.

Former deputy governor Kikuo Iwata, an architect of the BOJ's reflationist policies who retains close contact with the doves, warn that cutting already ultra-low rates further could do more harm than good by crippling commercial banks.

But he sees the chance Noguchi's addition will embolden the doves to propose more radical steps to fend off risks of a return to deflation.

"For the reflationist-minded board members, the last resort would be to ramp up government bond buying or take interest rates deeper into negative territory," Iwata said.