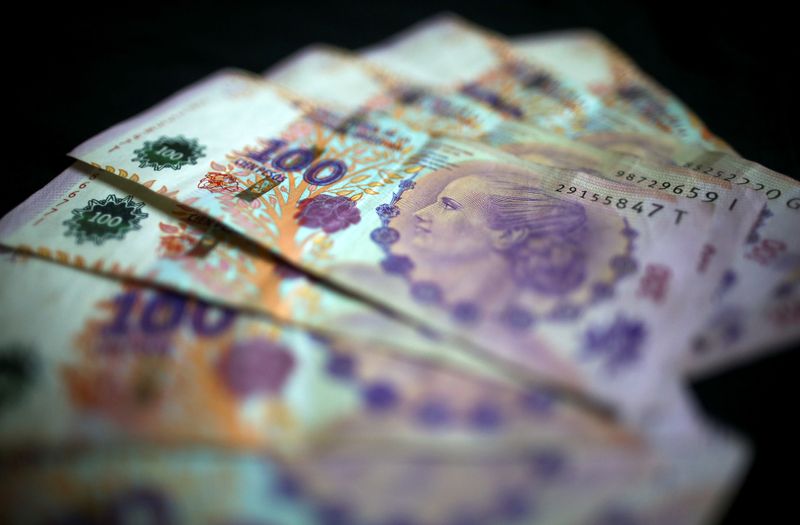 BUENOS AIRES (Reuters) - Argentina has seen a strong uptick in foreign currency inflows on the back of high global grains prices, reducing the risk of a sharp near-term devaluation of the peso currency and giving the government breathing room to slow pedal economic reforms.

The South American country, a major producer of soy, corn and wheat, has acted to protect the peso and foreign reserves with strict capital controls since a market crash in 2019. That had stoked fears of a sudden correction.

However, with bumper global grain prices easing the FX situation and the central bank reining in its funding of the Treasury, the government has signaled a slower depreciation of the peso ahead, calming investor worries.

Bank of America said in a research report on Monday that the "FX situation has improved markedly due to the fiscal consolidation and monetary slowdown," adding this meant a devaluation was unlikely before mid-term elections in October.

The central bank has bought a net $1.364 billion of foreign currency in the last three months, versus an outflow of nearly $5 billion in the five months before that.

Bank of America pointed to high soybean prices as potentially bolstering the trade balance by $7 billion, and said additional funding could come in from a planned wealth tax and the International Monetary Fund releasing extra reserves.

There is a flip side, however, analysts said. The lower pressure on the FX gives the government leeway to stall larger economic reforms and to strike a deal with the IMF, seen as key to stabilizing the country's fragile economy.

Argentine President Alberto Fernandez on Monday said the country would not rush to reach a new agreement, a shift in tone from earlier plans for a deal by May, which is needed to replace a failed $57 billion facility from 2018.

Bank of America said there were serious risks of a delay as the "FX improvement gives more room to maneuver," though adding it still predicted a deal could be reached by the middle of the year, before the election - though it would be "a close call."

Argentina settlement and clearing agent Neix said the current strategy appeared to be using the official exchange rate to anchor prices, which could exacerbate the already large gap with unofficial rates often used by individuals and firms.

That gap between the official and unofficial rates is currently around 60%, the lowest since the middle of last year but still historically high, underscoring the persistent demand for dollars outside the formal banking system.

"The floor of this gap will not only depend on a combination of things - how the talks go with the IMF, the economic recovery and the pandemic," said Sabrina Corujo, director of the consulting firm Portfolio Personal Investments.

Economist Federico Furiase added that "farm dollars" would arrive with the main harvests in April and May, though he cautioned that in election years the government was likely to want to use these to bolster spending.

The slow progress on policy change has infuriated some creditors and seen hard currency bond prices nosedive, despite a successful restructuring last year with private creditors. Inflation is also rearing its head once again as the economy reopens and pent up liquidity is released.

"There is a climate of hopelessness and mistrust," said Mariano SardÃ¡ns, director of wealth management firm FDI, adding even a new IMF deal would not likely lift asset prices.