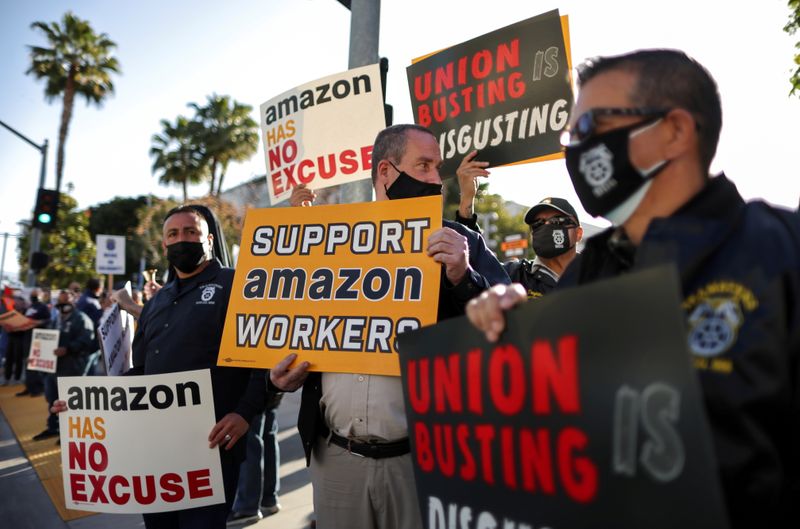 By Nandita Bose and Jeffrey Dastin

(Reuters) - A U.S. labor board official has recommended a rerun of a landmark Amazon.com Inc union election in Alabama where employees had voted overwhelmingly against making their warehouse the online retailer's first to organize in the United States.

In the coming weeks, a regional director for the U.S. National Labor Relations Board will decide whether to order the rerun based on this recommendation, said an official on Monday with the board who asked not to be named.

The Retail, Wholesale and Department Store Union (RWDSU), which workers rejected joining earlier this year by a more than 2-1 margin, had said Amazon illegally threatened staff with reduced benefits and compromised the election's integrity via a ballot collection box it secured outside the warehouse.

The labor official's recommendation in support of a new election focused on problems with the collection box, a person familiar with the matter said. Reuters has not seen a copy of the recommendation, which a labor board official said may be released Tuesday.

Amazon said it planned to appeal.

"Our employees had a chance to be heard during a noisy time when all types of voices were weighing into the national debate, and at the end of the day, they voted overwhelmingly in favor of a direct connection with their managers and the company," Amazon said in a statement.

Stuart Appelbaum, the RWDSU's president, welcomed the recommendation Monday and said, "The question of whether or not to have a union is supposed to be the workersâ decision and not the employer's."

During a May hearing that lasted three weeks, the RWDSU had argued Amazon improperly influenced voting by pressuring employees to drop ballots in the mailbox while they were in view of warehouse cameras, creating a perception of surveillance that U.S. labor law forbids. Amazon also improperly adorned a tent surrounding the mailbox with messaging related to its anti-union campaign, the RWDSU had said.

Amazon has said the mailbox was installed to give nearly 6,000 eligible voters a convenient option for returning their ballots and that the tent shielded workers from cameras, which predated the collection box.

The recommendation casts doubt on Amazon's victory over the unionizing effort in a contest that amounted to a setback for the U.S. labor movement. The unionâs organizing campaign drew implicit support from U.S. President Joe Biden and lawmakers including Senator Bernie Sanders, who visited the warehouse.

U.S. labor law forbids companies from threatening to cut benefits or close facilities when workers support a union. The law also prohibits them from spying on organizing activities or leaving employees with the impression they are under surveillance.

Still, employers such as Amazon have wide legal latitude to campaign aggressively, including by requiring employees to attend mandatory meetings that cast unions in a negative light. Amazon held such meetings, sent text messages to employees and even displayed campaign literature in at least one of the Alabama warehouse's restroom stalls.