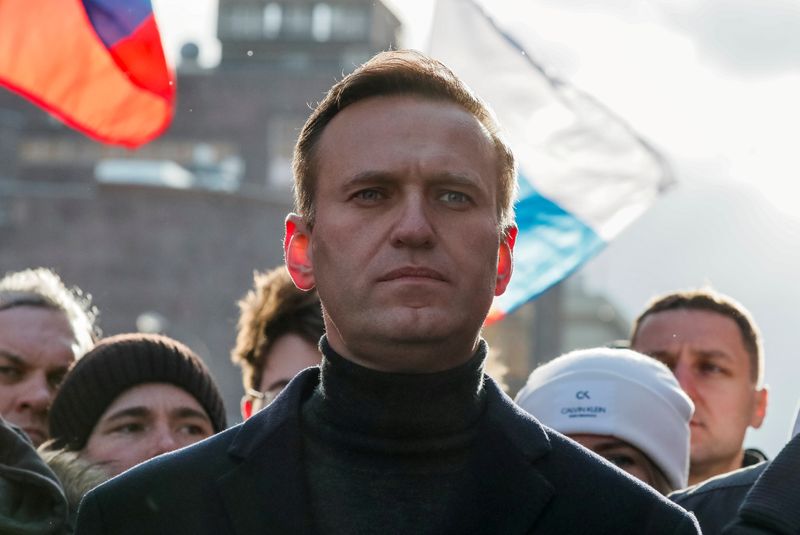 By Tom Balmforth and Polina Nikolskaya

MOSCOW (Reuters) -Allies of jailed Kremlin critic Alexei Navalny said on Wednesday they were concerned by a deterioration in his health and his lawyers said they had not been allowed to visit him in the prison camp holding him.

Navalny, 44, was jailed last month for two and a half years on charges he called fabricated. He was arrested as he returned to Russia from Germany in January where he had been recovering from what doctors said was a nerve agent poisoning.

Navalny began experiencing serious back pain last week, felt a numbness in his leg and was unable to stand on it, according to close ally Leonid Volkov, who said that Navalny had only been given two pills of Ibuprofen in response.

Volkov said that Navalny's lawyers Olga Mikhailova and Vadim Kobzev had tried to visit him for a meeting scheduled at 1000 GMT on Wednesday, but had not been allowed in all day.

Kobzev, one of the lawyers, confirmed he had been denied access which he said was unacceptable.

Navalny is being held in a prison camp in the Vladimir region around 100 km (62 miles) east of Moscow.

Speaking by phone from outside the camp, Kobzev told Reuters that Navalny's lawyers had visited him on a daily basis while he was in custody in the Vladimir region and that Wednesday was the first time they had not been allowed to see him.

The federal prison service and the regional one in Vladimir did not immediately respond to a request for comment.

Navalny's lawyers said prison officials had told them it was not possible to visit their client due to unspecified security measures.

Volkov said it was possible Navalny had been moved to the prison hospital and that the facility's administration was trying to hide that fact.

"Given all of the circumstances known to us, the sharp deterioration of his health can only cause extreme concern," said Volkov.

Navalny's allies have held protests calling for his release and on Tuesday announced plans to stage what they hope will be the biggest anti-Kremlin street protest in modern Russian history this spring, in a new push to win his freedom.

The authorities say such protests are illegal.

The West has demanded Russia release Navalny, something Moscow has called unacceptable interference in its internal affairs.

Russian authorities say they have seen no evidence that Navalny was poisoned and have suggested he is a Western puppet sent back to try to destabilise the political situation in Russia.