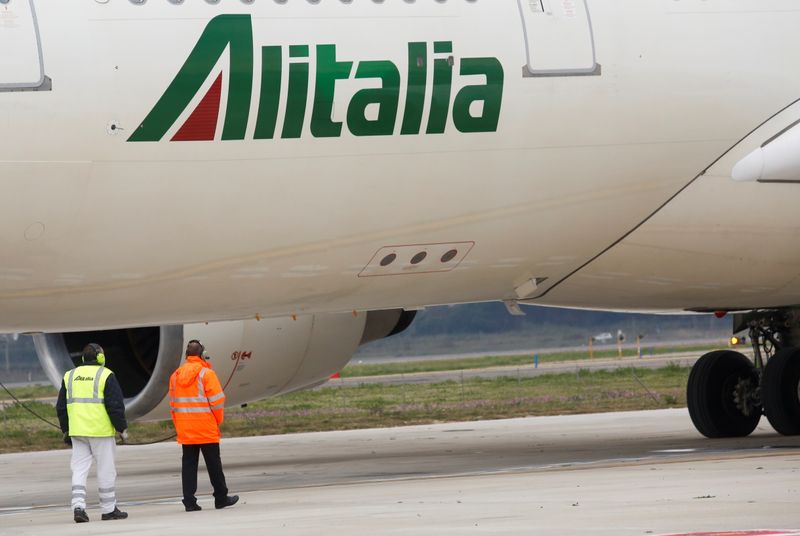 FILE PHOTO: Two workers are seen next to an Alitalia plane at Fiumicino airport in Rome, Italy, March 5, 2021. REUTERS/Remo Casilli

ROME (Reuters) - Alitalia is close to launching open tenders to sell off its handling and maintenance businesses as the government is negotiating and revising the new carrier's industrial plan with Brussels, Italy's industry minister said on Wednesday.

"I think (Alitalia) is close to open tenders for handling and maintenance. We can think of simplified formulas, but it's not an easy task," Giancarlo Giorgetti told a parliamentary committee.

Italy has earmarked 3 billion euros ($3.6 billion) to launch a new state-owned airline, dubbed ITA, to replace Alitalia, which has been run by state-appointed administrators since it was declared bankrupt in 2017.

The European Commission has asked for open tenders for the assets of the old Alitalia rather than transferring them directly to the new carrier, although Alitalia administrators have complained saying it would take time and accrue losses.

Giorgetti explained that the industrial plan approved by the ITA board was undergoing a "deep revision" in light of Rome's negotiations with Brussels.

"The plan must be based on discontinuity, economic sustainability and market vision. This means that in order to fly ITA cannot be too heavy," the minister said.

He added that all operations needed to be accelerated given it was the government's aim for ITA to take off by June or July.

"The time factor is decisive. It is in our interests for ITA to be launched as soon as possible, and we are already late given that it should have been operational from April."