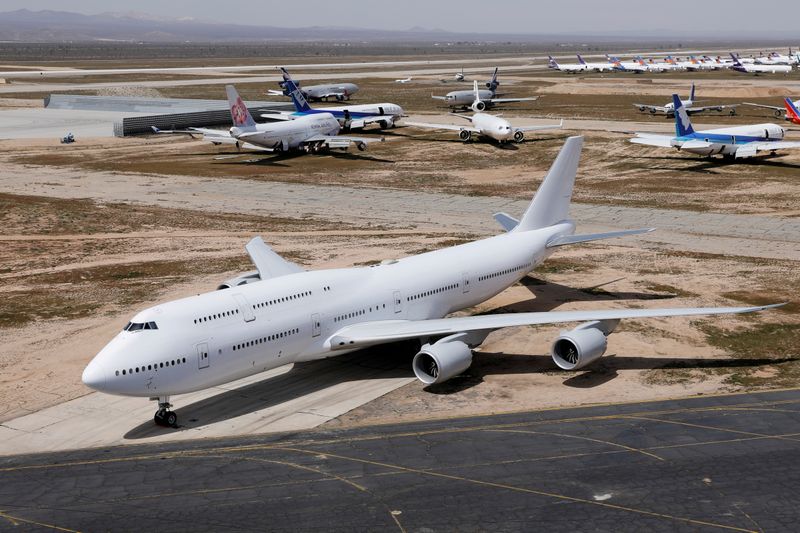 FILE PHOTO: A Boeing 747-8, one of two that had originally been ordered by a now-bankrupt Russian airline and later earmarked for an Air Force One replacement project, is seen parked at Victorville Airport in Victorville, California, U.S., March 26, 2019.

By David Shepardson and Jeff Mason

Boeing said in its suit filed April 7 that Texas-based GDC failed to complete interior work on the two heavily modified 747-8 Air Force One planes and is "roughly one year behind schedule in meeting its contractual obligations."

A Boeing spokeswoman on Saturday declined to comment on GDC's filing.

Boeing chose to utilize existing aircraft for the two replacement Air Force One aircraft rather than new planes, GDC said.

"Because of its problems with engineering, program management, and its own financial difficulties, Boeing has fallen behind in the project schedule for the aircraft. Boeing

looked to GDC as a scapegoat to excuse its lack of performance on the aircraft to the United States Air Force," GDC said, adding Boeing's "false" statements have damaged its reputation with the Air Force "and the aviation industry worldwide."

Boeing's suit says GDC's delays "have resulted in millions of dollars in damages to Boeing and threaten to jeopardize work that is of critical importance."

In July 2018, Boeing received a $3.9 billion contract to build two 747-8 aircraft for use as Air Force One, due to be delivered by December 2024. A Boeing spokeswoman said on April 8 the planemaker still planned to meet the Air Force's delivery schedule.

The Boeing 747-8s are designed to be like an airborne White House, able to fly in worst-case security scenarios such as nuclear war, and are modified with military avionics, advanced communications and a self-defense system.