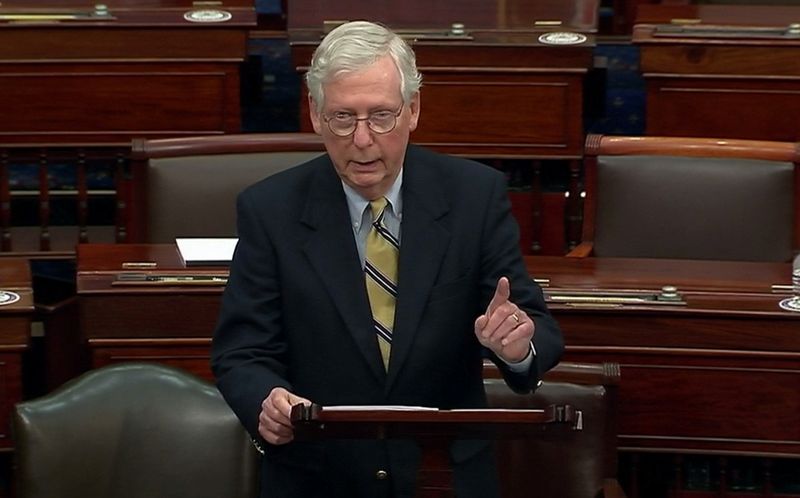 U.S. Senate Minority Leader Mitch McConnell (R-KY) speaks about former U.S. President Donald Trump, accusing him of dereliction of duty, immediately after the U.S. Senate voted to acquit Trump by a vote of 57 guilty to 43 not guilty, short of the 2/3s maj

By Makini Brice and David Morgan

WASHINGTON (Reuters) - U.S. Senate Minority Leader Mitch McConnell called Donald Trump "practically and morally responsible" for his supporters' deadly attack on the Capitol, only moments after voting to acquit the Republican former president on an impeachment charge of inciting the melee.

The top Senate Republican explained the unexpected turnabout at the end of a five-day impeachment trial, by declaring it unconstitutional to convict Trump of misconduct now that the former president has left office and become a private citizen.

The Senate earlier in the week found that the trial was constitutional in a 56-44 vote.

"There is no question that President Trump is practically and morally responsible for provoking the events of the day," said McConnell, who along with the rest of the Congress and former Vice President Mike Pence fled the mob that descended on the Capitol on Jan. 6.

"The people who stormed this building believed they were acting on the wishes and instructions of their president," McConnell said in a speech on the Senate floor.

The remarks came soon after the 100-seat chamber acquitted Trump on a single charge of inciting insurrection in a 57-43 vote that failed to reach the 67-vote threshold necessary for conviction. Seven Senate Republicans joined Democrats to vote for conviction.

The House of Representatives had impeached Trump on Jan. 13, a week before he left office.

House Speaker Nancy Pelosi denounced the senators who made Trump's acquittal possible as a "cowardly group of Republicans" and blamed McConnell for not allowing the House to deliver the impeachment charge to the Senate while Trump was still in the White House.

"Senator Mitch McConnell just went to the floor essentially to say that we made our case on the facts," said Representative Jamie Raskin, who had led the nine House Democrats who prosecuted Trump before the Senate.

McConnell was not the only Republican to castigate Trump for his behavior after voting for acquittal.

"The question I must answer is not whether President Trump said and did things that were reckless and encouraged the mob. I believe that happened," Senator Rob Portman in a statement.

"My decision was based on my reading of the Constitution," the Ohio Republican added. "I believe the Framers understood that convicting a former president and disqualifying him or her from running again pulls people further apart."

Senator Chuck Grassley, the Senate's most senior Republican, described Trump's language in a fiery speech to supporters just before the Capitol assault as "extreme, aggressive and irresponsible."

But he said the Senate had no jurisdiction to hold a trial, agreed with Trump's legal team that the former president deserved more "due process" and said the prosecution had not made their case.

In comments that echoed the prosecution's case, McConnell said Trump had orchestrated "an intensifying crescendo of conspiracy theories" and described the former president as "determined to either overturn the voters' decision or else torch our institutions on the way out."

McConnell suggested that Trump could still face criminal prosecution for his acts.

"President Trump is still liable for everything he did while he was in office as an ordinary citizen," McConnell said. "He didn't get away with anything. Yet."