African Union says use of AstraZeneca COVID shot should continue 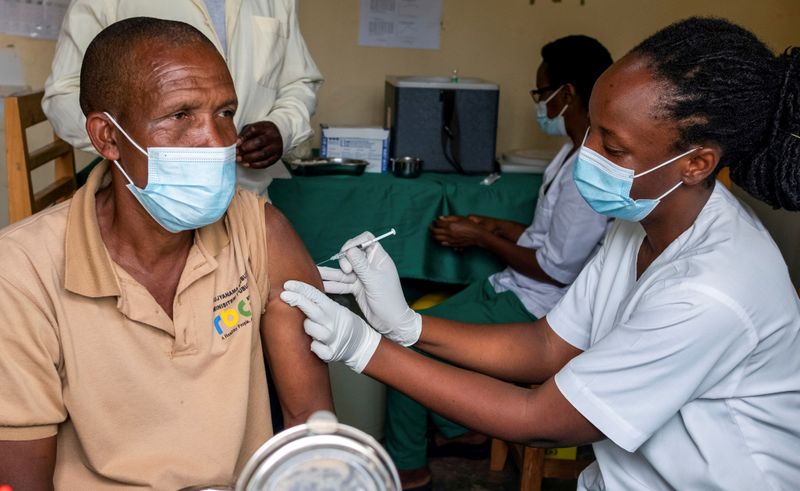 FILE PHOTO: A man receives a vaccine against the coronavirus disease (COVID-19) at the Masaka hospital in Kigali, Rwanda March 5, 2021. REUTERS/Jean Bizimana/

ADDIS ABABA (Reuters) - The African Union said on Thursday that African countries should continue to use AstraZeneca's COVID-19 vaccine, echoing the World Health Organization (WHO) by saying the shot's benefits outweighed risks.

The recommendation comes after more than a dozen European countries suspended use of the AstraZeneca vaccine amid concerns over the risk of blood clots.

Africa has lagged wealthier parts of the world in vaccinations, with many countries on the continent using free AstraZeneca shots distributed by a global scheme co-led by the WHO to kick-start immunisation campaigns.

John Nkengasong, director of the Africa Centers for Disease Control and Prevention, told a news conference the "benefits still outweigh the risks" and countries should "move forward".

The head of the disease control body added that any adverse reactions should be monitored and reported.

"I encourage countries...to continue with their vaccination campaigns and not to pause, as we are in a race against time," the WHO's Africa director Matshidiso Moeti told a separate briefing. "The more people are protected, the less likelihood of mutations producing more dangerous variants of the virus."

AstraZeneca said on Sunday that a review of safety data of more than 17 million people in the United Kingdom and European Union who had been given its vaccine had shown no evidence of an increased risk of blood clots.

The European Medicines Agency is investigating reports of 30 cases of unusual blood disorders out of 5 million people who received the AstraZeneca vaccine in the 27-nation EU. It said it has so far found no causal link.

In Africa, the Democratic Republic of Congo has delayed the rollout of AstraZeneca's shot, citing the suspensions in Europe.

But other countries are forging ahead. Angolan Health Minister Silvia Lutucuta said on Thursday her country had not recorded any serious side-effects from AstraZeneca's vaccine so far. She said doses shipped to Angola were from a different batch to ones distributed in Europe.

Muluken Yohannes, a senior adviser to Ethiopia's health ministry, said the government there would continue using the AstraZeneca shot. "It is too early to associate the link between the current problem and the vaccine," he told Reuters.