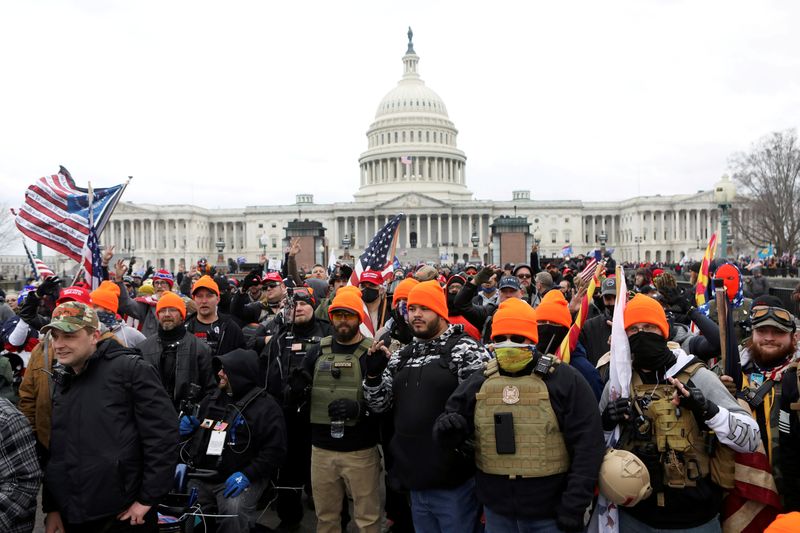 FILE PHOTO: Members of the far-right group Proud Boys make 'OK' hand gestures indicating "white power" as supporters of U.S. President Donald Trump gather in front of the U.S. Capitol Building to protest against the certification of the 2020 U.S. presiden

WASHINGTON (Reuters) - Two accused leaders of the far-right Proud Boys militia group on Tuesday pleaded not guilty to multiple criminal charges related to their alleged role in the deadly January attack on the U.S. Capitol by supporters of former President Donald Trump.

At a federal court hearing in Washington, D.C., Ethan Nordean of Washington state and Joseph Biggs of Florida both pleaded not guilty to riot-related charges including conspiracy, civil disorder, obstruction of an official proceeding and destruction of government property.

Both are presently free on bail. Prosecutors are seeking to revoke their pre-trial release and to have them detained before trial.

In court documents arguing for the defendants' detention, prosecutors cited evidence they said showed that Nordean and Biggs helped incite the Jan. 6 violence both before and during the Capitol attack.

Prosecutors said Nordean "personally engaged in the destruction of government property by shaking and then knocking down a metal barrier on the Capitol grounds," and that he and Biggs "then defiantly led the crowd... into the west plaza outside the U.S. Capitol."

Arguing for Biggs pre-trial detention, prosecutors said it was "difficult to overstate the seriousness of not only the Defendantâs offenses but those committed by those under his leadership."

In a ruling earlier this month ordering Nordean's release from detention, however, Beryl Howell, chief federal judge in Washington D.C., said that while Nordean had led a march to the Capitol, "Evidence that he directed other defendants to break into or enter the Capitol is weak, to say the least."