âIt was her spiritâ: Myanmar teen shot by police was determined to protest coup 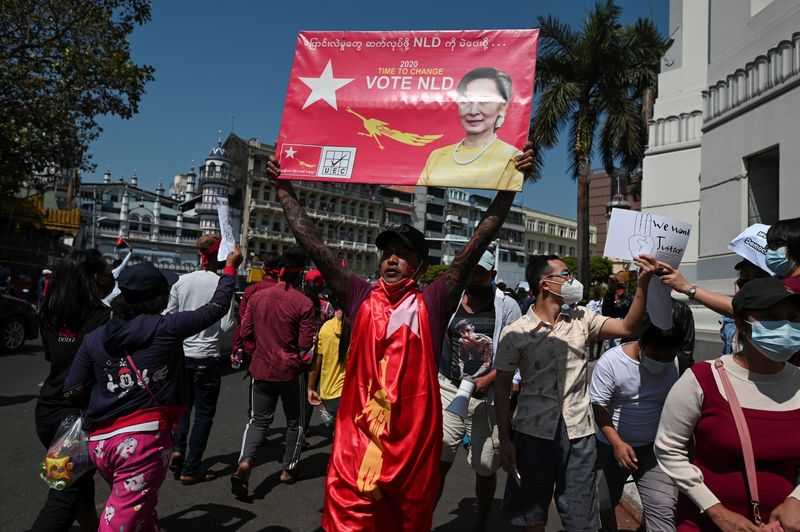 A protestor holds up a banner depicting Aung San Suu Kyi as people rally against the military coup and to demand the release of elected leader Suu Kyi, in Yangon, Myanmar, February 10, 2021. REUTERS/Stringer

Instead, she is fighting for her life in a hospital in the capital Naypyitaw after she was shot in the head when police cracked down on a protest against the military coup.

Myanmar's army seized power on Feb. 1 and detained elected leader Aung San Suu Kyi, ending a long transition towards democracy and bringing tens of thousands of demonstrators onto the streets.

The shooting of the teenager - the first known serious casualty of the protests - has roused anger across the nation and rallied support for the anti-coup movement, many of whose members are part of a Generation Z who say they refuse to allow another generation to experience military rule.

Mya Thwate Thwate Khaing, a 19-year-old grocery store worker, had traveled with her sisters from a nearby village to Naypyitaw, the army-built capital in the center of the country, for a protest on Tuesday. It was one of dozens in towns and cities across the country.

Police quashed the peaceful protest with water cannon and gunfire. The teenager was struck in the back of the head with a live round as she was fleeing. Doctors do not expect her to survive.

Her brother Ye Htut Aung told Reuters the family â though supportive of the protests â had urged her against going to the demonstration for fear of violence. She insisted.

"It was her spirit," he said by phone. "She wanted to and I couldnât stop her."

The last time he spoke to her, he said, was on a voice call over a poor connection. Neither could get the video to work â the new ruling junta has been stifling internet access.

Ye Htut Aung warned her to stay at the back of the protest and that the police were not to be trusted.

"What are you going to do if they shoot?" he asked.

The army's True News Information Unit said in a statement the security forces only used non-lethal weapons and the police were investigating. It said two police had been injured by the "rioters" and were in hospital.

The shooting has caused outrage across the country and recalled the long history of bloody crackdowns on protest by the security forces in Myanmar. During uprisings against the former ruling military junta in the late 1980s, thousands were killed.

Protesters draped a massive a portrait of her from a bridge in downtown Yangon, the commercial capital, on Wednesday. "Lets together oppose the dictator who kills the people" the banner read.

Video footage posted to Facebook and verified by Reuters shows the moment she was shot. In the footage, she stands at the front of a crowd of protesters facing riot police.

Wearing a red t-shirt and helmet, she is first struck by a stream fired by a water cannon. A woman beside her takes her hand and tries to lead her away. While their backs are turned, there is a crack and she crumples to the ground. Police continue to soak the crowd with water cannon as they try to tend to her.

"I didn't think that she was shot at first, I thought she had fainted because she was angry," said her sister, Mya Tha Toe Nwe, who was there.

Through tears, she said Mya Thwate Thwate Khaing was the youngest of four siblings.

"I feel so heartbroken," she told media. "We only have one mother, our dad is already dead.... My mother also can't stand her young daughter is dying like this."

A doctor from the hospital told Reuters she had lost significant brain function and was not likely to survive.

Human Rights Watch said a 20-year-old man also wounded by a bullet was in a stable condition.

Ye Htut Aung said the military had tried to have his sister transferred to an army hospital but the family had refused.

The family were all National League for Democracy (NLD) supporters who voted for the party in the Nov. 8 election that it won by a landslide. The military has said, without evidence, that the election was fraudulent, to justify their seizure of power.

Like many of those on the frontlines of Myanmarâs protests, she is also a teenager who until Tuesday had her whole life ahead of her.

In photos posted on Facebook, she stands in what looks like a forest or garden wearing a cartoon bear-print pink shirt, her long hair blown back from her face.

Since the news spread of her injury, her page has been flooded with supportive comments.