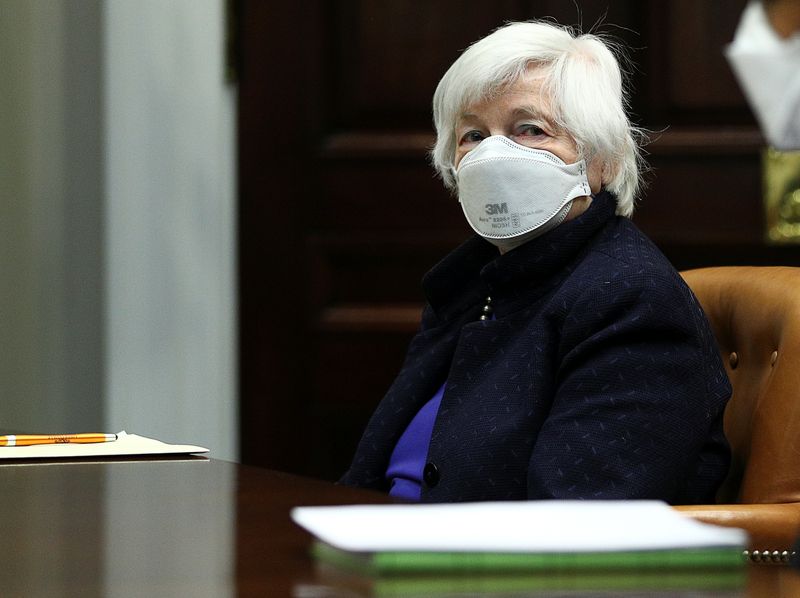 WASHINGTON (Reuters) - The COVID-19 pandemic has had an "extremely unfair" impact on the income and economic opportunities of women, U.S. Treasury Secretary Janet Yellen said on Monday, calling for long-term steps to improve labor market conditions for women.

Yellen, in a dialogue with International Monetary Fund chief Kristalina Georgieva, said it was critical to address the risk that the pandemic would leave permanent scars, reducing the prospects for women in the workplace and the economy.

She noted that women's participation in the workforce was already lower in the United States before the pandemic than in Europe, another issue that needed to be addressed.

"I think it's absolutely tragic, the impact that this crisis has had on women, especially low-skilled women and minorities," Yellen said, noting that while people at the top of the economic scale had continued to do well, those nearer the bottom, who had already been struggling, had been hardest hit.

"It is an extremely unfair thing that's happened," Yellen said, noting that women as a group had experienced far greater job losses since they had been disproportionately represented in the service sector and many had dropped out of the labor force to care for children, who were out of school.

"We're really concerned about scarring, permanent scarring, from this crisis," she said, adding her hope that President Joe Biden's $1.9 trillion relief bill would help get the labor market back on track this year or next.

The goal, she said, was to avoid the decade-long gap seen before the labor market recovered after the global financial crisis of 2008-2009.

As of January, women accounted for slightly more than half of the 10 million jobs lost during the coronavirus crisis, even though they typically make up a little less than half the U.S. work force.

More than 2.5 million women left the labor force between February 2020 and January of this year, compared to 1.8 million men.

In the longer-term, Yellen said it was critical to improve the conditions facing women in the labor market, including lack of benefits, paid leave for family emergencies and child care.

"These are things that we are going to address over time," she said, echoing remarks made at the White House by Julissa Reynoso, co-chair of the newly established White House Gender Policy Council and chief of staff to Jill Biden.

"Our goal is to really look at long-term structural changes that can advance the full integration of women, women of color ... so that issues of discrimination in equity and equality in the labor force and in pay can be addressed in a systemic manner long term," Reynoso told reporters on Monday.