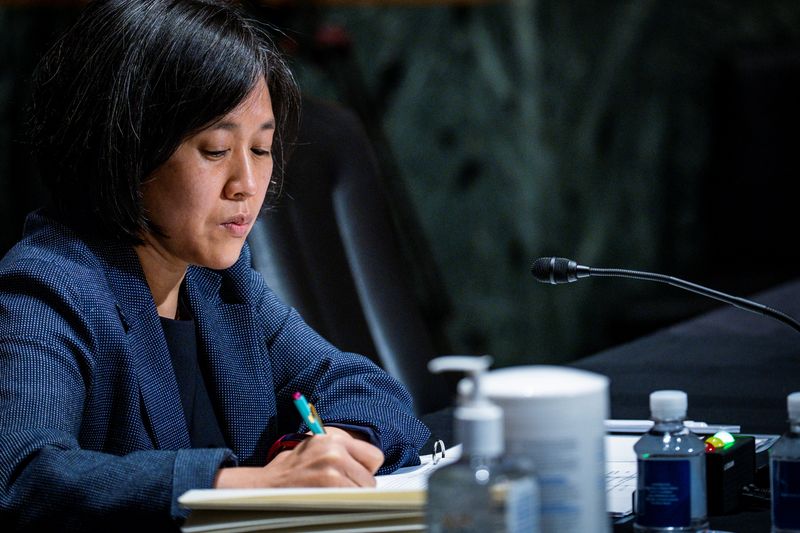 Tai told a U.S. House Ways and Means Committee hearing that existing trade law tools are more aimed at protecting U.S. industries and companies after they have already been injured by illegal price dumping and subsidies or other unfair competition.

"I would really like to strengthen the trade tools that we have to address the problems we have today," Tai said, adding that many of the U.S. trade laws are nearly 50 or 60 years old.

U.S. trade laws, with their backward-looking nature, have struggled to prevent damage to the U.S. steel industry as China has built up massive amounts of production capacity over the past 20 years, Tai said, adding that China's industrial plans show it is poised to do the same in other industries.

On Wednesday, Tai called for an update to the 1962 "Section 232" national security trade statute that was used to impose tariffs on steel and aluminum imports.

Her remarks on Thursday add detail on her desire for tools to address China's massive subsidies and state-driven economic system. If enacted, these could lay the groundwork for future new tariffs to shield more U.S. industries or be used as leverage in negotiations.

The Biden administration is conducting a "top-to-bottom review" of China trade policy, including how to approach former president Donald Trump's "Phase 1" trade deal with Beijing that expires at the end of 2021.

Tai said the review also will include what to do with many expired exclusions from "Section 301" tariffs on Chinese imports, noting that "time is of the essence" in completing the review.

Returning to the committee where she guided policy as the chief Democratic trade lawyer, Tai reiterated the Biden administration's tough stance on China's trade and human rights abuses.

"We welcome fair competition. But if China cannot or will not adapt to international rules and norms, we must level the playing field," she added.