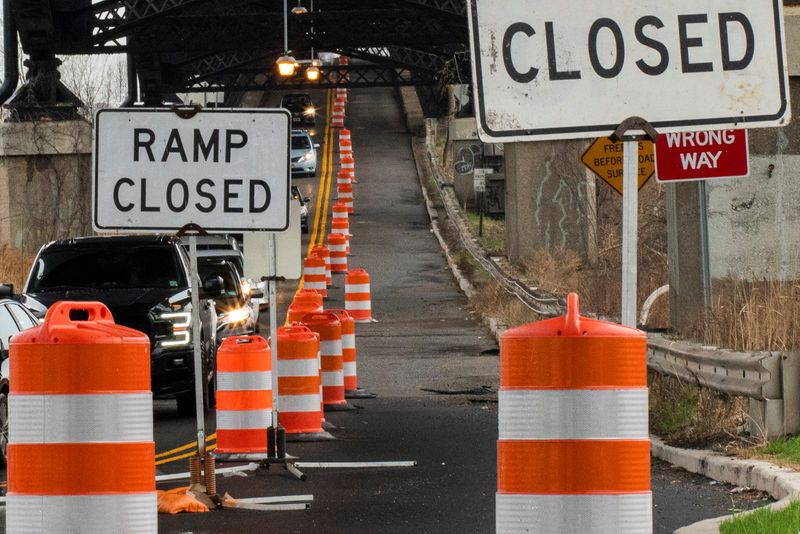 A street is closed due to work in the road in Jersey City, New Jersey, U.S. March 31, 2021. REUTERS/Eduardo Munoz

By David Morgan and Susan Cornwell

The Senate voted 67-32 to take the first procedural step toward debating the measure that has the support of Democratic President Joe Biden.

The bipartisan agreement https://www.reuters.com/article/idUSKBN2EY2VP, which follows months of negotiations, gained the support of all 48 Democrats, two independents and 17 Republicans on this first procedural vote.

Additional procedural votes and debate on the bill itself were expected, possibly into the weekend or beyond.

Democrats intend the bill -- which includes funding for roads, bridges, broadband and other physical infrastructure -- to be the first of a pair of packages, followed by a sweeping $3.5 trillion "human infrastructure" package that faces staunch Republican opposition and some dissent among moderate Democrats.

Republicans blocked a similar move last week, saying details were not nailed down. In the latest bill, details on transit and broadband were still being finalized but lawmakers said legislative text would be completed soon.

"We're excited to have a deal," Sinema said. "We've got most of the text done, so we'll be releasing it and then we'll update it as we get those last pieces finalized."

Addressing a concern over funding among Republican lawmakers including Senate Minority Leader Mitch McConnell, Portman said the package is "more than paid for" and added: "We look forward to moving ahead and having a healthy debate."

Officials said the package would be financed through a combination of measures. The largest was redirecting $205 billion in COVID-19 relief funds. Another was recouping $50 billion in fraudulently paid unemployment benefits during the pandemic and getting states to return unused federal unemployment funds, raising another $50 billion.[L1N2P42U3]

Democratic Senator Ron Wyden said he was investigating whether COVID-19 spending on hospital and nursing home providers is being tapped, with hospital admissions from the highly contagious Delta variant on the rise. "I'm gathering facts," he said.

The bipartisan bill is a key component of Biden's larger domestic policy agenda. Democratic leaders plan to move ahead with a sweeping $3.5 trillion budget "reconciliation" package. Republicans have vowed to oppose that effort, and Sinema appeared lukewarm about it in remarks to the Arizona Republic newspaper in her state on Wednesday.

The bipartisan bill will propose $550 billion in new spending, a White House fact sheet said, down from $579 billion in a framework the negotiators sketched out several weeks ago.