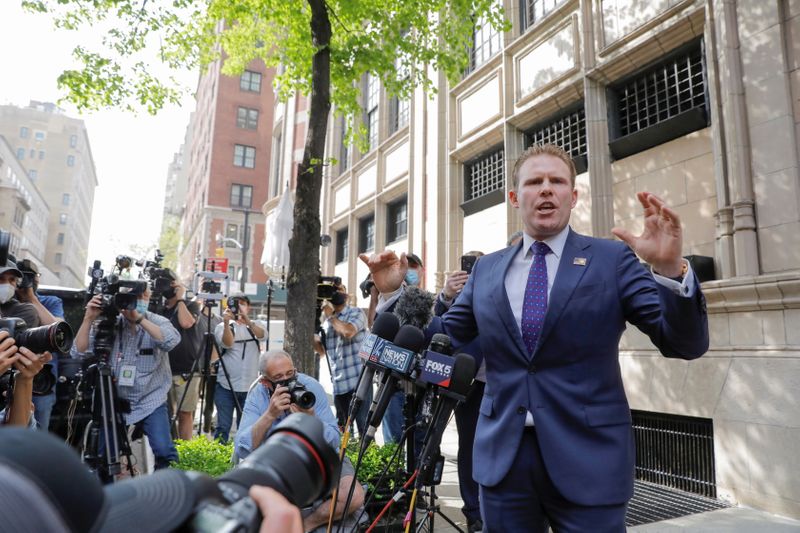 Touting his father's success in reducing crime in New York City before leaving office in 2001, the younger Giuliani said he would make New York state a better place, particularly for businesses hit hard by the pandemic.

"The man was able to accomplish what I hope to accomplish in New York state, which is turning around what many people think may be an ungovernable place," Giuliani said at a news conference in lower Manhattan, with New York Harbor as a backdrop.

"There is no more effective playbook than the Giuliani playbook," said Giuliani, 35, a graduate of Duke University who has never served in elected office.

Giuliani's candidacy may set up a contest between two prominent New York political families. The current governor, Andrew Cuomo, is the son of Mario Cuomo, who served three terms as the state's highest elective official.

Andrew Cuomo has come under sharp political fire in recent months. He is facing investigations for his accounting of COVID-19 deaths in state nursing homes, as well as for allegations of sexual harassment by former staffers and others.

Andrew Giuliani touted his close ties with former U.S. President Donald Trump, having worked in the White House's Office of Public Liaison at a time when his father was a personal attorney to the president.

He noted some businesses have left New York after finding better economic opportunities in Florida.

Asked how he would convince businesses to return to New York, he replied: "Right now I'm not certain there is a very good answer to that. Businesses have been disincentivized."

Giuliani spoke glowingly about low unemployment during the Trump Administration. "I think his policies were some of the best policies in the last 50 years in this country."

Rudy Giuliani's business dealings with Ukrainian oligarchs while he was working as Trump's lawyer are the subject of a probe by federal prosecutors in Manhattan. Federal agents searched his home and office in April, seizing phones and computers.

Giuliani defended his father on Tuesday, calling the investigation of his Ukraine dealings the result of a politicized U.S. Justice Department.

The elder Giuliani also faces a $1.3 billion defamation lawsuit by a voting machine company over his false claims about the November 2020 presidential election being rigged.

(Reporting by Julia Harte in Washington and Barbara Goldberg in New York; Editing by Dan Grebler)