China strikes back at U.S. with new tariffs on $75 billion in goods 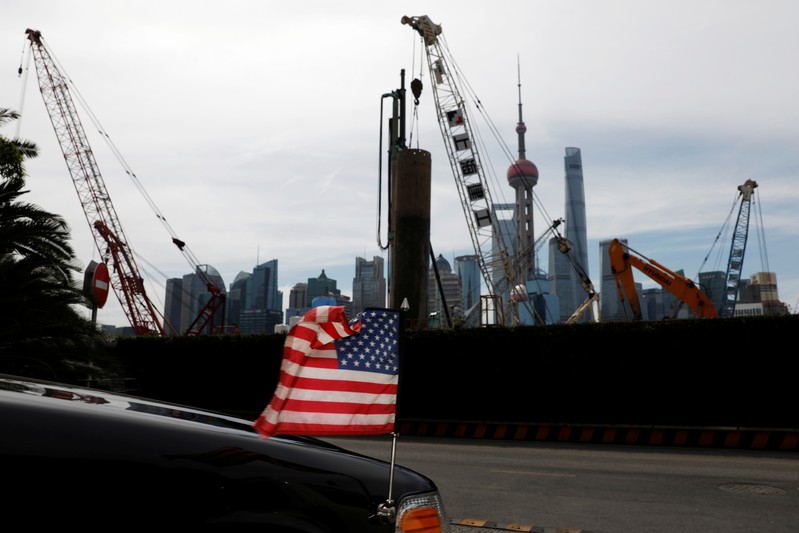 FILE PHOTO: A U.S. flag on an embassy car is seen outside a hotel near a construction site in Shanghai, China, July 31, 2019. REUTERS/Aly Song

BEIJING (Reuters) - China said on Friday it will impose retaliatory tariffs against about $75 billion worth of U.S. goods, putting as much as an extra 10% on top of existing rates in the dispute between the world's top two economies.

The latest salvo from China comes after the United States unveiled tariffs on an additional $300 billion worth of Chinese goods, including consumer electronics, scheduled to go into effect in two stages on Sept. 1 and Dec. 15.

"China's decision to implement additional tariffs was forced by the U.S.'s unilateralism and protectionism," China's Commerce Ministry said in a statement, adding that its retaliatory tariffs would also take effect in two stages on Sept. 1 and Dec. 15.

The White House and U.S. Trade Representative's office did not immediately respond to Reuters' request for comment on China's latest tariffs.

Though Chinese and U.S. trade negotiators held another discussion earlier in August, neither side appears ready to make a significant compromise and there have been no sign of a near-term truce.

The protracted dispute has stoked fears about a global recession, shaking investor confidence and prompting central banks around the world to ease policy in recent months. U.S. stocks fell on Friday on the news of China's tariffs, underscoring growth concerns.

In an interview on CNBC, Federal Reserve Bank of Cleveland President Loretta Mester said she viewed the Chinese retaliatory tariffs as "just a continuation" of the aggravated trade policy uncertainty that has begun weighing on American business investment and sentiment.

The knock-on effects of the U.S.-China trade dispute was a key reason behind the Fed's move to cut interest rates last month for the first time in more than a decade.

"It is unclear as things stand whether the U.S.-China trade negotiations will continue as planned in early September," said Agathe Demarais, global forecasting director at The Economist Intelligence Unit, in an e-mail statement.

"All eyes will now turn to the U.S. Fed to see whether Jerome Powell, the Fed Chairman, will react to these developments by accelerating rate cuts."

Among U.S. goods targeted by Beijing's latest tariffs were as soybeans, which will be hit with an extra 5% tariff starting Sept. 1. China will also tag beef and pork from the United States with an extra 10% tariff.

China is also reinstituting an additional 25% tariff on U.S.-made vehicles and 5% tariffs on auto parts that had been suspended at the beginning of the year. Carmakers such as Daimler

Ford (NYSE: F), a net exporter to China, said in a statement it encouraged the United States and China to find a near term solution.

"It is essential for these two important economies to work together to advance balanced and fair trade," the company said.