Big questions loom ahead of Biden's next spending push, like 'what is infrastructure?' 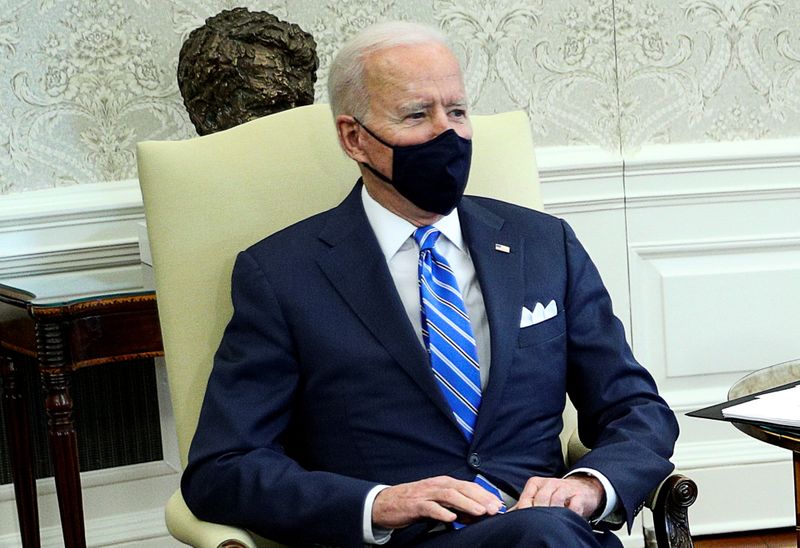 FILE PHOTO: U.S. President Joe Biden holds a meeting on infrastructure with members of Congress in the Oval Office at the White House in Washington, U.S., March 4, 2021. REUTERS/Tom Brenner

By Jarrett Renshaw and Trevor Hunnicutt

Biden may sketch the outline of the plan, promised on the campaign trail, in a joint address to Congress this month and provide details in April, giving lawmakers several months to work on the bill before an August recess, people familiar with the White House plans said.

The White House has added infrastructure experts to the administration in recent weeks, and called in lawmakers and companies to discuss the topic.

With a narrow majority in Congress, Biden and Democrats need to either move all or parts of the package through a budget process that would only require party-line votes known as reconciliation, or attract Republican votes and make it a bipartisan effort.

Either way, Reuters' interviews with lobbyists, lawmakers, administration officials and company executives show broad questions still need to be answered before any bill can be written.

HOW DO YOU DEFINE INFRASTRUCTURE?

Biden and his fellow Democrats hope to expand the definition of infrastructure beyond existing transportation architecture to include items aimed at tackling climate change and its effects, echoing the $2 trillion, 10-year "Build Back Better" proposal floated during his campaign.

That includes investments in electric vehicle charging stations, zero-emission buses and zero-carbon electricity generation by 2035, and directing dollars to minority neighborhoods and contractors, part of a pledge to increase racial equity.

Democrats have signaled they want to invest billions in creating and refurbishing affordable housing in any package and expand broadband internet access to all Americans, particularly in rural communities.

U.S. House of Representatives Speaker Nancy Pelosi said on Friday that she had directed senior Democrats to begin working with Republicans on a âbig, bold and transformational infrastructure package."

Republicans and influential trade groups like the U.S. Chamber of Commerce support large-scale infrastructure spending, but have concerns about Democratic efforts to inject policy provisions on climate or equality into a spending bill.

Representative Peter DeFazio, who chairs the House Transportation and Infrastructure Committee, said in an interview his âtentative timelineâ is for the committee to complete action on its portion of an infrastructure bill before the end of May.

He said a proposal could be divided between reconciliation to raise revenue and direct funds and traditional legislative procedures to set policy.

HOW TO PAY FOR IT?

House Democrats passed a $1.5 trillion infrastructure package last year that died in the Senate, but could be a blueprint here. It was one-third funded from existing fuel taxes and budget transfers.

Leading Democrats suggest doing away with Trumpâs 2017 tax cuts or imposing new taxes on the super wealthy - ideas that are a non-starter for most Republicans and some Democrats.

Some economists and business groups have suggested lawmakers should forget about finding new funding for the whole package and instead borrow some of the money given the historically low cost of debt and economic growth projections.

Others, including the U.S. Chamber of Commerce, suggest using an existing federal infrastructure bank to lend money at cheap rates to private companies.

CAN THE HIGHWAY TRUST FUND BE FIXED?

The Highway Trust Fund, established in 1956, finances most federal government spending for highways and mass transit - but it has been in the red since 2008, according to the Tax Policy Center.

Federal taxes on gasoline and diesel fuel, a key source of revenue, have not increased from 18.3-cents-per-gallon for gasoline or 24.3 cents for diesel since 1993, requiring some $140 billion in transfers from general revenues.

Some Democrats want to rethink how drivers are taxed, switching to a vehicle-miles traveled tax that would sweep in electric cars, but collecting the tax is difficult and raises many issues, including privacy concerns.

The American public doesnât particularly like "earmarks," federal funding stuffed into bills for a specific project in one lawmaker's district or state, but they may be a way to bring bipartisan policy back.

The practice, banned since 2011 because of abuses, has some support among both parties.