BEIJING, Feb. 24, 2021 /PRNewswire/ -- iQIYI Inc. (NASDAQ: IQ) ("iQIYI" or the "Company"), an innovative market-leading online entertainment service in China, is pleased to announce that its exclusive historical comedy series My Heroic Husband has received widespread popularity and acclaim, achieving a content popularity index of 10,000 and making it China's first mega-hit show in 2021. It is only the second series to achieve a popularity index of over 10,000 following Story of Yanxi Palace in 2018. 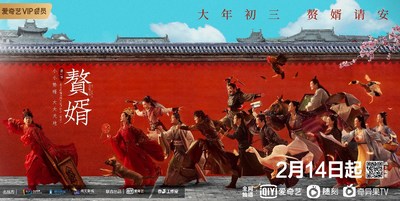 Rather than simply counting views to gauge content popularity, iQIYI uses a proprietary index system that draws on a range of user behavior data such as interaction and shares on social media. By gathering and analyzing a significant amount of data, iQIYI's content popularity index can assess user feedback and thus serves as an important indicator of content quality and popularity.

Featuring timely and important themes such as gender equality and freedom, My Heroic Husband tells the story of a modern businessman who travels back in time and ends up in the body of a man about to be married into a family of merchants. By revealing the stereotypes that exist in contemporary society, the show has struck a chord among viewers and triggered heated discussion, continuously breaking the popularity index records and becoming China's biggest hit of 2021 so far.

My Heroic Husband has set new records for its popularity at iQIYI and maintained the top position on Enlightent, Maoyan, Lighthouse, Guduodata, Vlinkage, and other major media lists. Following the show's rise in popularity, the hashtags #MyHeroicHusband and #TVdramaMyHeroicHusband have garnered 2.12Â billion and 1.13 billion views respectively. In addition, topics related to the show have been among the top 230Â most-searched terms. To satiate viewers who are clamoring for the latest episodes, iQIYI has announced that from February 24, two episodes will be released at 8pm China standard time each day from Sunday to Wednesday, with VIP members enjoying the benefit of being able to first view six episodes.

In recent years iQIYI has produced and released many quality dramas with various themes that have met the diversified demands of users while communicating positive values on thought-provoking, realistic topics. For example, Story of Yanxi Palace won the hearts of global viewers with its innovative plot, interesting characters, well-designed content, and display of traditional Chinese culture. Since its release in 2018, the drama has reached audiences across 80-plus countries and regions. It was covered by over 100 global mainstream media agencies and made it to the top of Google's global hot TV series list in 2018. Following this, The Thunder, Go GoSquid!, and other dramas were released to widespread public and critical acclaim, topping national popularity charts. Meanwhile, The Bad Kids, The Long Night, and other dramas in the "Mist Theater" series have maintained sustained popularity at home while also successfully released to overseas markets. This run of hit shows is further validation of the Company's strong dedication to producing world-class content that promotes cultural exchange and bolsters confidence in the rise of China's entertainment industry.

Chief Content Officer at iQIYI Wang Xiaohui said that My Heroic Husband is the latest in a long line of phenomenal hits released by the Company.

"We are glad that our commitment to creating quality and diversified content has been recognized by viewers. That is the key force driving us to produce successful original content, and also the force behind the overall development of China's entertainment offerings. Going forward, we remain committed to producing high-quality content. By doing so we can show global audiences that China's entertainment industry is capable of producing world-class content while also serving as a role model for the domestic production of movies and series."