LAS VEGAS, April 7, 2021 /PRNewswire/ --Â Today, Resorts World Las Vegas announced that multi-platinum, GRAMMYÂ® Award-winning artist, DJ and producer Zedd will headline Zouk Nightclub and Ayu Dayclub, Las Vegas's newest day and nightlife experiences opening this summer at the city's most anticipated resort. At the first resort to be built on the Strip in more than a decade, Zedd's inaugural residency will be the first of an exciting group of talent to grace Resorts World Las Vegas's stages. 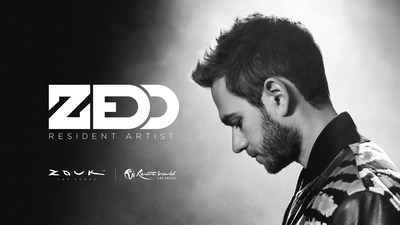 Zedd's multi-year residency will include performances at Zouk Nightclub and AYU Dayclub, the first venues to open in the United States from Zouk Group, Singapore's leading lifestyle and entertainment company that has been at the forefront of pioneering music movements in Asia for over 29 years.

"Las Vegas has become a massive part of my life. Having the opportunity to play so many shows there throughout the years has made it like a second home to me. My Vegas shows have become a central hub to connect with fans, friends and artists from all over the world," said Zedd. "I couldn't be more excited to create a brand new and exciting show at my new home at Resorts World Las Vegas with Zouk Group."

"After several iconic performances at Zouk Group venues over the last decade, we are proud to now partner with Zedd and continue our longstanding relationship with him," said Andrew Li, Chief Executive Officer of Zouk Group. "To provide such a visionary in the music industry with a brand-new stage at the Strip's newest resort is truly an honor, and guests can expect an immersive show experience that extends well beyond a traditional DJ set."Â

About Zouk GroupZouk Group is a global lifestyle company with establishments that span across nightlife, entertainment, and dining sectors. Its namesake, Zouk, is a 29-year-old nightlife brand known for pushing boundaries of dance music and propelling Singapore on the global map. Ranked Asia's best club on DJ Mag's annual Top 100 Clubs list since 2017 and top globally since 2010, Zouk is Singapore's foremost clubbing institution, delivering the freshest in dance music across genres, state-of-the-art sound and lighting systems, a constant roster of stellar international, regional and local residents, and top-notch service and hospitality.

Zouk has since evolved into an all-encompassing global lifestyle brand that has expanded into the food & beverage sector with new brands like social gaming bar RedTail, vibe dining restaurant FUHU, and more concepts in the pipeline. Aside from club offerings, Zouk Group also owns ZoukOut, Asia's premier dawn-to-dusk music festival featuring world class DJs, which attracts a cosmopolitan mix of locals and tourists within and beyond Asia to the beachfront of Singapore. Zouk Group now oversees all club and lifestyle entities in Singapore, Genting Highlands in Malaysia, on board Genting-owned cruise ship, and soon to come, Las Vegas. The company also owns the franchise to Five Guys in Singapore and Malaysia.

About ZeddMulti-platinum, GRAMMYÂ® Award-winning artist/DJ/producer Zedd made his debut with "Clarity" after signing with Interscope in 2012 and has been breaking down barriers surrounding music genres ever since. Throughout his career, Zedd has worked with a diverse range of artists to create hits, including Foxes on "Clarity" (which earned Zedd a 2014 GRAMMYÂ® "Best Dance Recording"), Hayley Williams on RIAA 2x platinum-certified hit, "Stay The Night" (which rackedÂ  up moreÂ  thanÂ  950Â  millionÂ  streams),Â  andÂ  Selena Gomez on the platinum-certified track, "I Want You To Know," which spent four weeks at #1 on Billboard's "Hot Dance/Electronic Songs" chart. He's also collaborated with Alessia Cara on their hit single "Stay" which has amassed over 4.2 billion streams worldwide, held the #1 spot at Top 40 radio for six consecutive weeks and earned Zedd his second GRAMMYÂ® Award nomination, and with Maren Morris and Grey on the monster hit "The Middle," which earned Zedd his second #1 at Top 40 radio. Digitally, the song has over 3.5 billion streams worldwide and earned Zedd three GRAMMYÂ® nominations including "Record Of The Year," "Song Of The Year," and "Best Pop Duo or Group Performance."