With THE SHOW, SHOWTIMEÂ® Premieres Exclusive Inside Look At The Making Of The Pepsi Super Bowl LV Halftime performance

NEW YORK, Feb. 12, 2021 /PRNewswire/ --Â SHOWTIME has announced that it will air THE SHOW, a 90-minute feature documentary that will provide a unique, first-ever look into the making of the Pepsi Super Bowl Halftime Show. This year's show starred The Weeknd and was executive produced by Emmy nominee Jesse Collins (BET Awards, GrammyÂ® Awards, OscarsÂ®), Roc NationÂ andÂ directed byÂ acclaimed multi-award nominatedÂ Hamish Hamilton (who has directed the Halftime Show since 2010). Directed by Emmy nominee Nadia Hallgren (Becoming), THE SHOW is produced by the PepsiÂ in-house content studio and Boardwalk Pictures (Cheer, Chef's Table) and will premiere later this year.

This past Sunday, nearly 100 million people around the world tuned in to watch The Weeknd's visual and sonic artistry on the Halftime Show stage. What the world witnessed was the product of tireless hours, days and months of collaboration among first-time Halftime Show executive producer Collins, brought on by second-time executive producers Roc Nation (and other entertainment industry visionaries) to pull off one of the biggest musical productions during one of the most challenging, unprecedented times. Despite the logistical challenges that the collective team faced in the lead-up, the result is what the world saw Sunday â an imaginative, out-of-the-box performance.

"The Pepsi Super Bowl Halftime Show is undoubtedly the world's biggest stage, producing the most viewed and talked about moment in music every single year. The pressure to deliver an iconic, memorable and entertaining performance is felt well beyond the artist, as there are a number of people â behind the scenes â who are vital to its success," said Todd Kaplan, VP of Marketing - Pepsi.Â  "With our new documentary coming to SHOWTIME, we are taking fans on the emotional and thrilling journey of what it takes to make the biggest show of the year â with the added complexity of doing so amidst a global pandemic.Â  With Jesse Collins and a number of super-talented creatives at the helm, THE SHOW chronicles all the drama and hard work that goes into successfully pulling off a show of this magnitude."

"Anchored by The Weeknd's dynamic performance, THE SHOW is a worthy snapshot of the tremendous artistry and effort that goes into the Pepsi Super Bowl Halftime Show," said Kent Sevener, Executive Vice President Content Acquisition, Showtime Networks Inc. "Jesse Collins has been absolutely passionate about this project, and Nadia HallgrenÂ brings the kind of energy and insight that will make this behind-the-scenes look a transformative experience and something unique for SHOWTIME viewers."

THE SHOWÂ is being brought to life by award-winning filmmaker and cinematographer Nadia Hallgren from The Bronx, New York. She directed the four-time Emmy-nominated documentaryÂ BecomingÂ (2020) and made history as the first person to receive Emmy nominations for both Outstanding Directing for a Documentary/Nonfiction Program and Outstanding Cinematography for a Nonfiction Program on the same project. (Becoming producer Lauren Cioffi will join Nadia to produce THE SHOW.)Â  In 2019, her documentary short,Â After Maria, was shortlisted for an Academy Award. Nadia won the Special Jury prize at SXSW in 2018 for her independent documentary seriesÂ She's The TicketÂ and a Webby Award forÂ Gavin Grimm Vs.Â

"This historic year with Jesse Collins as the first Black EP of the Halftime Show brought an opportunity to tell a new story," said Nadia. "We get a window into the process of a diverse team of executives and creatives working at the highest level, in front of and behind the camera. It's fun to see these masters at work while they also uplift others. I hope this can inspire people to pursue big dreams."

The Super Bowl LV Halftime Show was the Pepsi brand's 10th time as presenting sponsor of the event, ninth year in a row and second year in the partnership formed between NFL and Roc Nation.

About PepsiCoPepsiCo products are enjoyed by consumers more than one billion times a day in more than 200 countries and territories around the world. PepsiCo generated more than $70 billion in net revenue in 2020, driven by a complementary food and beverage portfolio that includes Frito-Lay, Gatorade, Pepsi-Cola, Quaker, Tropicana and SodaStream. PepsiCo's product portfolio includes a wide range of enjoyable foods and beverages, including 23 brands that generate more than $1 billion each in estimated annual retail sales.

Guiding PepsiCo is our vision to Be the Global Leader in Convenient Foods and Beverages by Winning with Purpose. "Winning with Purpose" reflects our ambition to win sustainably in the marketplace and embed purpose into all aspects of our business strategy and brands. For more information, visit www.pepsico.com.

About Boardwalk PicturesBOARDWALK PICTURES is an award-winning production company that has carved a unique niche within today's media landscape.Â  As creators and producers of some of the most recognizable premium, non-fiction TV shows and feature films, Boardwalk Pictures continues to push the boundaries of factual entertainment.Their work includes Cheer, Chef's Table, Street Food, The Goop Lab, Last Chance U, We Are Freestyle Love Supreme and The Black Godfather.Â 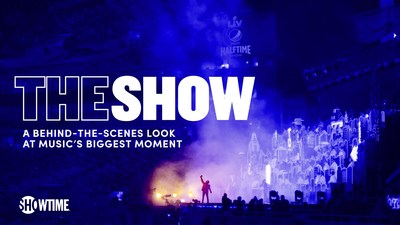