WASHINGTON, Jan.Â 28, 2021 /PRNewswire/ --Â The U.S. Chemical Production Regional Index (U.S. CPRI), rose 1.2% in December following a 0.6% gain in November and a 1.2% increase in October, according to the American Chemistry Council (ACC). During December, chemical output grew in all regions, with the largest gains occurring in the Gulf Coast and Midwest regions. Chemical production expanded in all segments except miscellaneous other inorganic chemicals. The U.S. CPRI is measured on a three-month moving average (3MMA) basis. 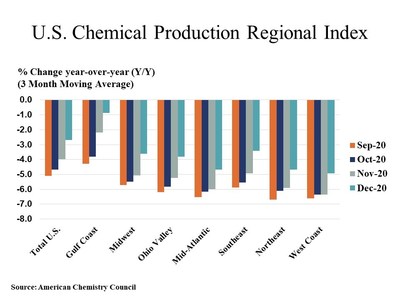 As nearly all manufactured goods are produced using chemistry in some form, manufacturing activity is an important indicator for chemical demand.Â The manufacturing recovery continued for a sixth straight month in December, with overall factory activity up 1.1% (3MMA). The trend in production rose in nearly all key chemistry end-use industries, with the strongest gains seen in iron and steel, appliances, aerospace, construction supplies, foundries, plastic products, tires, paper, structural panels, and apparel.

Compared with December 2019, U.S. chemical production was off 2.7%, the nineteenth consecutive month of year-over-year declines, but reflecting improvement versus earlier in the year. Chemical production remained lower than a year ago in all regions, with the largest year-ago declines seen in the Northeast, Mid-Atlantic, and West Coast regions.

The chemistry industry is one of the largest industries in the United States, a $565 billion enterprise. The manufacturing sector is the largest consumer of chemical products, and 96% of manufactured goods are directly touched by chemistry. The U.S. CPRI was developed to track chemical production activity in seven regions of the United States. The U.S. CPRI is based on information from the Federal Reserve,Â and includes monthly revisions as published by the Federal Reserve. To smooth month-to-month fluctuations, the U.S. CPRI is measured using a three-month moving average. The reading in December reflects production activity during October, November and December. Â

http://www.americanchemistry.com/newsroomThe American Chemistry Council (ACC) represents the leading companies engaged in the business of chemistry.Â  ACC members apply the science of chemistry to make innovative products and services that make people's lives better, healthier and safer.Â  ACC is committed to improved environmental, health and safety performance through Responsible Care, common sense advocacy designed to address major public policy issues, and health and environmental research and product testing.Â  The business of chemistry is a $565 billion enterprise and a key element of the nation's economy.Â  It is one of the nation's largest exporters, representing ten cents out of every dollar in U.S. exports. Chemistry companies are among the largest investors in research and development.Â  Safety and security have always been primary concerns of ACC members, and they have intensified their efforts, working closely with government agencies to improve security and to defend against any threat to the nation's critical infrastructure.