From Employee #2 to CEO of the largest independent performance marketing agency, Morrison led the firm's explosive growth while maintaining its award-winning 'people-first' culture

NEW YORK, Oct. 4, 2021 /PRNewswire/ --Â Tinuiti, the largest independent performance marketing firm across Streaming TV and the Triopoly of Google, Facebook, Amazon, today announced that Tinuiti CEO Zach Morrison has been named to Ad Age's 40 under 40 List for 2021. He joins the slate of 39 other talented individuals who have been instrumental in advancing the advertising industry in a demonstrable way during the last 12 months. 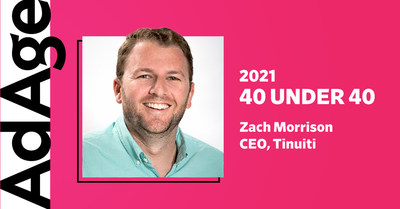 Morrison's ambition to become the world's first truly accountability-driven global performance marketing firm has steered the company from a two-person search agency in 2005 to achieving seven-fold growth over the past four years. This includes a total of fiveÂ acquisitions, the appointment of an all-star board of directors, and a partnership with New Mountain Capital, a leading growth-oriented investment firm with over $28 billion in assets under management.

Despite the pandemic, Morrison guided Tinuiti through outstanding growth (+30% revenue), all while driving over Billions in revenue for clients in 2020. Tinuiti hired over 360 new employees in the last 12 months, surpassing 1,000 in headcount, a 57% year-over-year increase. Morrison also created roles 100% dedicated to DEI and a subcommittee of paid volunteers while pledging to increase BIPOC representation across the entire company from 27% to 34% by 2023.

"What Zach has achieved in his career leading Tinuiti is nothing short of staggering. He's been here from the very beginning, steering a rocketship during one of the most tumultuous times not just in our industry but in our world. But what really sets him apart is that he has never, ever sold out. Zach has never wavered in his commitment to people over everything. Because of Zach's leadership and vision, Tinuiti is not just a high-growth company but a healthy-growth company." -Tinuiti CMO Dalton DornÃ©

The business model Morrison has championed is founded on a commitment to put people first that was put to the test during a chaotic year that will go down in history for a deadly pandemic and a racial justice movement. Morrison doubled down on his people-first philosophy, making good on a pledge not to lay off or furlough any employees and implementing two mandatory mental health days a month. In addition, as Americans took to the streets to demand racial justice as part of the Black Lives Matters movement, the CEO listened carefully to his employees, who were given time off from work to support social justice movements and made Juneteenth an official company holiday.

Morrison's commitment to employees' mental health and wellness has continued throughout the long tail of the pandemic. Morrison recently implementedÂ  "Tinuiti Recharge," an all-employee, PTO, company-mandated holiday from October 6, 2021 through October 11, 2021,Â  designed to give employees the opportunity to take a mental health moment, recalibrate and recharge in advance of the Q4 holiday season.

The AdAge 40 Under 40 list recognizes talented individuals who have, either personally or as part of a team, been responsible for helping to advance a business or a brand at an advertiser, agency, media, tech or marketing company in a demonstrable way within the last 12 months. Now, amid the pandemic, these individuals are even more critical. See the complete list at https://adage.com/40under40-2021.

About TinuitiTinuiti is the largest independent performance marketing firm across Streaming TV and the Triopoly of Google, Facebook, Amazon, with nearly $3 billion in digital media under management and over 1,000 employees. With industry-leading expertise in search, social, Amazon and marketplaces, addressable TV and mobile apps, CRM and email marketing and more, Tinuiti understands that success requires both strategy and channel expertise. Each solution is delivered through Tinuiti's performance planning framework, GAMMA, and is enabled by a proprietary suite of marketing intelligence and media activation technology âÂ Mobius. For more information visitÂ http://www.tinuiti.com.

About Ad AgeCreated in 1930 to cover a burgeoning industry with objectivity, accuracy and fairness, Ad Age continues to be powered by award-winning journalism. Today, Ad Age is a global media brand focusing on curated creativity, data and analysis, people and culture, and innovation and forecasting. From vital print editions to must-attend events and innovative platform offerings, Ad Age's industry-leading content include the coveted A-List & Creativity Awards, the Ad Age Next conference series and proprietary data including the Leading National Advertisers Report from the Ad Age Datacenter.