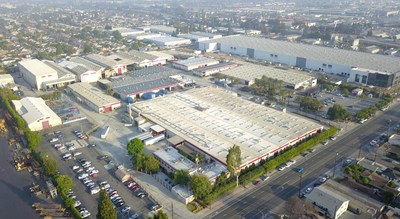 Building on five decades of quality, TABC is a primary supplier of parts for Tacoma trucks and produces past model service body parts for all North American produced Toyota vehicles.

"For 50 years, the team at TABC has played an integral role in our company's success, providing parts and components for our vehicles," said Chris Nielsen, executive vice president, Product Support and chief quality officer, Toyota North America. "So, it is great to celebrate all they have accomplished, and we look forward to their continuing leadership in providing quality products for our customers."

Celebrating with the Community

As part of its anniversary celebration, Toyota officials announced $200,000 in community investments to be split among seven nonprofit organizations, including:

"Toyota cares deeply about being a responsible member of society and improving our local communities," said TABC president Jim Zehmer. "It is fitting for us to mark our 50th anniversary by celebrating our employees that make all of this possible and by reaffirming our ties to the community with these contributions."

TABC, originally known as Atlas Fabricators, contracted with Toyota in 1972 to assemble truck beds for vehicles destined for the U.S. Two years later, Toyota purchased the operation and ultimately renamed it "TABC, Inc.," making it Toyota's first manufacturing investment in the U.S.

In March 2022, the operation announced an investment of $27 million to support an increase in production capabilities. Currently, the plant employs approximately 350 people and represents a $485 million investment.

About ToyotaToyota (NYSE: TM) has been a part of the cultural fabric in North America for more than 60 years, and is committed to advancing sustainable, next-generation mobility through our Toyota and Lexus brands, plus our more than 1,800 dealerships.

Toyota directly employs more than 48,000 people in North America who have contributed to the design, engineering, and assembly of nearly 43 million cars and trucks at our 13 manufacturing plants. By 2025, Toyota's 14th plant in North Carolina will begin to manufacture automotive batteries for electrified vehicles. With more electrified vehicles on the road than any other automaker, more than a quarter of the company's 2021 North American sales were electrified.

Through the Start Your Impossible campaign, Toyota highlights the way it partners with community, civic, academic and governmental organizations to address our society's most pressing mobility challenges. We believe that when people are free to move, anything is possible. For more information about Toyota, visit www.ToyotaNewsroom.com.