FRISCO, Texas, March 3, 2021 /PRNewswire/ --Â Whether it's a family member, a friend or your own personal fight, cancer has impacted us all in one way or another. It's the second-highest killer of people in America right behind heart disease. Our best defense against this insidious disease is research, patient support, early detection and awareness â a calling to which many dedicated charitable organizations throughout the United States devote themselves daily. And now, Le-Vel, the world leader in human nutritional innovation, will join them. Le-Vel has announced the official launch of Thrive Against Cancer, a year-long partnership with 12 worthy organizations, each of them focused on a specific type of cancer. This aggressive campaign takes aim at some of the most common forms of the disease. 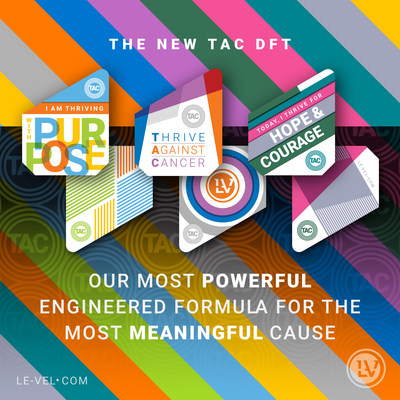 Just as exciting as the charitable aspect of Thrive Against Cancer is the brand new, Thrive DFT formulation developed specifically for this campaign. Thrive DFT is a technology-driven breakthrough in health, wellness, weight management and nutritional support. It features a one-of-kind delivery system designed to infuse the derma (skin) with Le-Vel's unique, premium-grade formula. Thrive Against Cancer DFTs are the most powerful weight loss engineered DFT yet and are upgraded with energy, mood support, plus antioxidants to help Thrivers achieve even better results. When taken as part of the Thrive Experience with Thrive Premium Lifestyle Capsules and Premium Lifestyle Shake Mix, DFT promotes an overall healthy lifestyle.

"We're extremely proud that our Brand Promoters and customers already helped to donate more than $1 million to breast cancer awareness over the last several years through our annual October partnership with the National Breast Cancer Foundation," say Co-CEOs Jason Camper and Paul Gravette. "Knowing the kind of impact we can have in just four weeks' time, we're inspired to take the fight against cancer year round and partner with additional organizations working tirelessly to eradicate some of the most common varieties of the disease. Together with more than 10 million Thrivers, we believe it's possible to live in a cancer-free world, and we're proud to support these 12 incredible organizations dedicated to making that dream a reality."

To learn more about Thrive Against Cancer, go to https://le-vel.com/lander/thriveagainstcancer

In 2019, less than seven years after the company's inception, Le-Vel reached a milestone of $2 billion in lifetime orders. Le-Vel has over 10 million Customer and Brand Promoter accounts and currently ships within the United States, Canada, Australia, New Zealand, and the United Kingdom.