As part of the project, the two sides are partnering with notable music artists from China and abroad, as well as ocean program experts, to launch both a series of charitable music singles, and a curated World Oceans Day playlist. 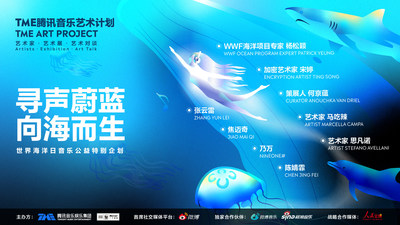 The United Nations officially designated June 8th as World Oceans Day in 2008 to highlight the major role that oceans have in everyday life as a critical part of the biosphere, and to mobilize and unite the world's population for the sustainable management of the world's oceans. Since its inception, the scope of activities for World Oceans Day has expanded to cover an increasingly wide range of issues, such as maritime space, international shipping, marine science and technology, climate change, and international cooperation for ocean preservation and sustainable development. Tencent Music's own efforts to further environmental preservation practices align well with these issues.

This is the second time that Tencent Music has partnered with WWF under the "TME Art Project," a series of initiatives that use music and art to further enhance environmental protection efforts. In October 2020, both sides jointly launched a crossover music and art exhibition, named "All Creation: Encounter with Animals," at Beijing's UCCA Center for Contemporary Art.

Through working with users, musicians, and artists, Tencent Music will continue to create high-quality works of music for charitable purposes. This not only deepens the social impact of music, art, and charity on society, but also creates more value for the music industry as a whole.

WWF (World Wide Fund for Nature) is one of the world's most respected independent organizations dedicated to the conservation of nature.

WWF has been active in China since 1980, when it was invited by the Chinese government as the first international NGO to work on nature conservation.