DENVER, March 8, 2021 /PRNewswire/ --Â Placekey, the universal location identifier for places that launched late last year with the support of 500+ organizations, today announced a strategic partnership with CQA (formerly CostQuest Associates), a leader in telecom GIS data and broadband consulting, in a move that will give purchasers of telecom data better data interoperability. 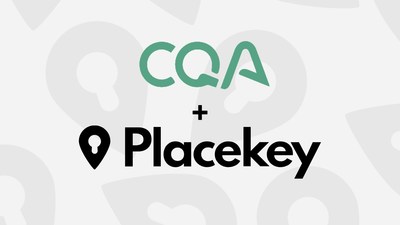 Following a series of high-profile partnerships, among them Experian and Snowflake, this new Placekey partnership enables purchasers of telecom and broadband GIS data to benefit from Placekey's free, universal standard places identifier. For customers, that means the ability to easily join first and third-party data, since the partnership allows Placekeys to be easily appended to address records, erasing existing challenges to dataset merging based on the fact that addresses and Points of Interest (POIs) are formatted differently across datasets.Stephen Mok, Director of Strategy and Innovation at CQA, discusses the transformative power of a universal location join key in improving CQA's data onboarding process: "Anyone who's dealt with addresses knows it's a real pain," he says. "Mainly, it's because there are textual inconsistencies. You can have a publicly-available source of addresses that says one thing, and you could have another that says another thing. It's a friction we continue to face, and it's a big challenge."

When it comes to Placekey's potential in saving time or cost for other vendors' onboarding flows, Mok says, "I could see this removing friction for people who are looking to take addresses or textual matches and efficiently clean them up." More than anything, CQA is "excited to contribute to the broader community" of analysts and data scientists working with location data.More information about Placekey:Placekey is a free universal location identifier that solves problems around address and POI matching, standardization, deduplication and entity resolution. Placekey launched with the backing of over 500 organizations, including Esri, CARTO, SafeGraph, Accenture, Tableau, and Snowflake. Since launch, Placekey has seen widespread adoption, with commercial organizations like TripAdvisor and Experian, city governments, independent developers, and local nonprofits adopting Placekeys in their datasets. Placekey hosts a 7,000-plus-member online Slack community that has used the tool to facilitate COVID-19 research, among other uses.