DALLAS, April 1, 2021 /PRNewswire/ -- TGIÂ FridaysÂ®, the iconic restaurant brand known as the authority on bringing good times, good food, and pursuing one's hopes and dreams, today announced Ray Blanchette will be stepping down as CEO. Effective immediately, Blanchette will transition to executive chairman of TGI Fridays' board and stay engaged on the only initiative he cares about, Under the Big Top. Fridays recently launched Under the Big Top by expanding outdoor dining into its parking lots so friends and families can safely gather to enjoy over-the-top menu items like Famous Whiskey-Glazed Skewers, Giant Churro Twists, and a Cotton Candy Cosmo, as well as family-fun activities. Blanchette will be leaving to join the circus as a high-wire artist; his successor has not been named. 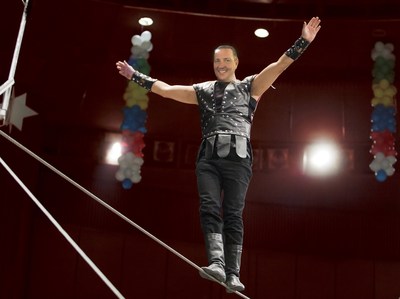 "The art of tightrope walking has been a fueling passion of mine for years. I always wanted to run away to join the circus as a young child, but the norm was joining the corporate world, and I left those dreams behind," said former CEO Ray Blanchette. "I'm extremely proud of the work my team has accomplished during my time at TGI Fridays, but now it's time for me to move onto new heights."

"We knew that Ray had a not-so-secret appreciation for tightrope walking but once we launched Under the Big Top, it became clear as we prepared our over-the-top menu and decorations that something had changed with Ray," said Sara Bittorf, Chief Experience Officer at TGI Fridays. "We weren't expecting his departure considering he joined Fridays only three short years ago, but we wish him the best of luck on his future maneuvers."

Blanchette joined TGI Fridays as the CEO in 2018. In previous years, he was the CEO of Ruby Tuesday, which was acquired by NRD Capital, a private-equity firm. He was also the CEO of Au Bon Pain, the fast-casual chain, and the CEO of Ignite Restaurant Group, the parent company of Joe's Crab Shack and Brickhouse Tavern + Tap.

To see where Blanchette winds up next, follow him on LinkedIn at https://www.linkedin.com/in/ray-blanchette-93208a9/

Of course, only the most observant will notice that April 1 is also April Fools' Day. While this is just a prank, TGI Fridays respects the profession of high-wire artists and firmly believe everyone should follow their dreams.