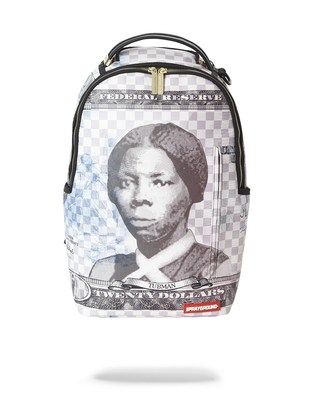 The brand launched a collection that captures the legacy of political activist, Harriet Tubman, taking inspiration from her portrait. The limited-edition backpack features a large portrait image on the $20 dollar bill. The bill represents a turning point in American history as she would be the first African American woman to be on US currency.

First launched in 2020 for Black History Month, selling out in just hours,Â  Sprayground decided that in celebration of this iconic and important moment, to re-release this backpack with a portion of the proceeds going to The Tubman FoundationÂ www.Tubman.org.

Sprayground VP, Sandflower Dyson, said: "It's an honor for us to be able to put an iconic historical figure in American culture on a Sprayground backpack. We are happy about Harriet Tubman on the $20 bill, so much so, we are doing Sprayground's first ever relaunch of a backpack! Harriet Tubman's activism changed the face of American culture and to be able to pay homage to such an amazing leader in our nation's history during Black History Month is truly a privilege. "

To browse the limited collection visit www.sprayground.comÂ and follow@Sprayground on Instagram for more updates.

About SpraygroundThe rebel Travel company started in 2010 by DAVID BEN DAVID as a cure to the boring and mundane bags that dominated the market. Bringing art, design, music, travel and the 6th sense into fashion to revolutionize a market that was known to be for utilitarian purposes. Today the bags are seen globally in over 30 countries with over 20 INTL Distributors with pop-up Locations in the USA and Brick & Mortar stores in Shanghai and Beijing. Collaborations such as NBA, Chris Brown, Spike Lee, Buzz Aldrin, Young Thug, The Game, Shaquille O'Neal, MARVEL, Odell Beckham Jr, The Colombian Army and Humanitarian Organizations. The brand has since evolved into travel luggage, outerwear and footwear, as well as starting a Music Label called Creative Outcasts. The brand has become a collectible item, with fans collecting over 30-70 bags. All Product is made in limited runs and never produced again!