Sony Field Tests Show ATSC 3.0 TV Broadcasting To Vehicles Is Ideal For Solid Reception In Difficult "On The Move" Conditions

SAN DIEGO, Feb. 11, 2021 /PRNewswire/ -- Newly released field testing done by Sony Electronics Inc. demonstrates the real-world advantages of robust next-generation TV broadcasting now being rolled out across the USA.Â The first substantial upgrade in local station broadcasting in more than two decades, named ATSC 3.0 or NEXTGEN TV, allows a TV station to custom tailor their broadcast to simultaneously reach different types of viewers on a variety of devices â including those in moving vehicles.Â And while robust passenger infotainment is one potential benefit, another more substantial opportunity exists for local TV stations to easily transmit software updates and information to fleets of future cars and trucks. 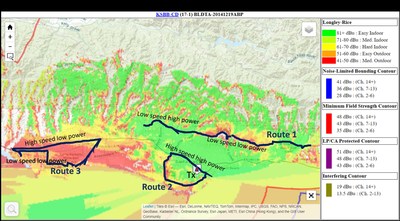 A joint effort of Sony's Semiconductor and Home Entertainment and Sound Products groups, the field tests were carried out with the assistance of the Pearl TV broadcasters and support from the Phoenix Model Market partners in Arizona and News-Press and Gazette Co. of Santa Barbara, California.

Testing was done to see how new worldwide demodulator chips from Sony Semiconductor and related software for ATSC 3.0 created by Sony Home Entertainment and Solutions of America would perform in a real-world environment.Â Difficult mountain passes and urban settings near Phoenix, Arizona provided one exceptionally complex reception challenge while another route along the Pacific coast near Santa Barbara, California had its own difficult reception environment.Â Â

"For the field testing areas selected, there are some rolling hills, rural canyons and light urban canyon terrain causing echo delays," said Mike Nejat, VP of Engineering at Sony Home Entertainment and Solutions of America.Â We wanted to find out if ATSC 3.0 can support multiple services, show an example configuration for automotive service, test the configuration with separate solutions in a variety of markets, terrains, and driving conditions, and test the simultaneous delivery of files not related to television entertainment to see how this transmission and reception system might appeal to new customers like automakers and fleet operators.

"Diversity can only help reception"

The Sony field testing, outlined in a paper (https://www.sony.com/en_us/ATSC-automotive-field-tests.html) written by engineers Luke Fay, Graham Clift, and Fred Ansfield, was done to test the capabilities of ATSC 3.0 transmissions and mobile reception.Â Driving routes in both Phoenix and Santa Barbara were chosen based on difficult reception areas, including a circle around the Paradise Valley north of Camelback Mountain in Arizona and along Highway 192 in California.Â  Four different routes in Arizona and two in California allowed engineers to test different signal-to-noise power levels and highway speeds above and below 55 mph.Â

A key finding: to accommodate all channel conditions of strong and weak signal strength, it could be beneficial to have a mix of active and passive reception antennas.Â "Diversity can only help reception," the paper states.

"Sometimes simplicity contains the greatest brilliance," said Pearl TV Chief Technical Officer Dave Folsom. "The real brilliance in Sony's chip and implementation is the use and enabling of diversity antenna reception.Â Pearl TV and the Phoenix Model Market partners know that mobile reception is particularly hampered by smaller, less efficient antenna systems in a motion environment with the signals reflecting off of adjacent automobiles, buildings, or terrain. In Sony's implementation they can use up to four antennas and their signal outputs which likely arrive at different levels and times at any given time that are then added together efficiently.Â Diversity reception has been around for years and has been used in situations like wireless microphones and microwave reception. The brilliance of Sony's design is the reduction of this capability to a small chip and using it to enable efficient NEXTGEN TV mobile reception."

Broadcasters in Detroit recently launched a "Motown 3.0 Test Track" and expect to test the Sony implementation this spring, as part of the broader initiative now underway in Michigan. Detroit is one of more than 20 cities now offering NEXTGEN TV broadcasts powered by ATSC 3.0 technology.Â By merging over-the-air TV with the Internet, NEXTGEN TV is expected to change the way viewers watch live broadcast television.Â Stations can now personalize their news, sports, live events and shows with interactive features that give viewers the content most relevant to them. More information about the upgrades â including specific stations and available receivers â is available at www.WatchNextGenTV.com.

About Sony Electronics Inc. Sony Electronics is a subsidiary of Sony Corporation of America and an affiliate of Sony Corporation (Japan), one of the most comprehensive entertainment companies in the world, with a portfolio that encompasses electronics, music, motion pictures, mobile, gaming, robotics and financial services. Headquartered in San Diego, California, Sony Electronics is a leader in electronics for the consumer and professional markets. Operations include research and development, engineering, sales, marketing, distribution and customer service. Sony Electronics creates products that innovate and inspire generations, such as the award-winning Alpha Interchangeable Lens Cameras and revolutionary high-resolution audio products. Sony is also a leading manufacturer of end-to-end solutions from 4K professional broadcast and A/V equipment to industry leading 4K and 8K Ultra HD TVs. Visit http://www.sony.com/news for more information.