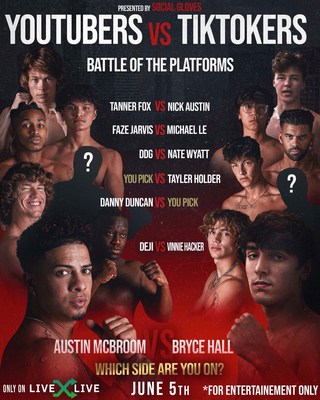 "Social Gloves: Battle of the Platforms" is a one of a kind, unprecedented live PPV entertainment mega event that will include a Gatsby-esque over-the-top production boxing competition pitting the world's largest social media stars from YouTube against the new icons from the explosive TikTok platform. Austin McBroom, founder of The ACE Family, will square off against TikTok star and teen idol Bryce Hall for the main event, with additional matches featuring Danny Duncan, DDG, Deji, FaZe Jarvis, Michael Le, Nate Wyatt, Tanner Fox, Tayler Holder and Vinnie Hacker. The colossal event will also include live musical performances by some of the world's biggest pop and hip-hop stars, to be announced in the coming weeks, all culminating in a legendary day and night of live pop culture entertainment.

The first in a series of major upcoming Social Gloves events planned in partnership with LiveXLive, "Social Gloves: Battle of the Platforms" is executive produced by social media visionary and elite Hollywood playmaker Paul Cazers and is represented by entertainment attorney Jason Ziven at Sanders Roberts, LLP.

"This promotion is the culmination of every key learning I've experienced being at the very forefront of the social media industry, including the first ever social media PPV event, Logan vs KSI, which I helped put together. There we saw that the rabid international fan base of these social media moguls drove more audience and sales than traditional legacy professional athletic events," said executive producer Paul Cazers. "This event is a perfect storm of celebrity, social media, technology, digital marketing, pop culture and, at the end of the day, good old Hollywood 101 celebrity and industry magic. Every component of this singular moment is architected to be a larger than life spectacle and drive viewers across the planet through all social media platforms. Every model that we're seeing is tracking this to be the largest PPV event in history."

"We are proud to partner with Paul and his team on Social Gloves, the biggest boxing competition between TikTokers versus YouTubers. Combining sports and music into a new franchise for a series of mega entertainment events allows us to promote across our flywheel â listen, watch, attend, engage and transact. I have innovated some of the biggest and best PPVs including boxing, music, home run derby, and movies, and we are finally at a point where the advancement of technology, and acceptance of brands, fans, and talent come together. We are thrilled that LiveXLive has the opportunity to be part of delivering the biggest global PPV in history. The social media heavyweights and their fans will become one voice across all social platforms and the ultimate champs will be decided on fight night," stated Robert Ellin, Chairman and CEO of LiveXLive.

Additional details for "Social Gloves: Battle of the Platforms," including ticket and PPV information, will be announced in the coming weeks.

About LiveXLive Media, Inc.Headquartered in Los Angeles, California, LiveXLive Media, Inc. (NASDAQ: LIVX) (the "Company") (pronounced Live "by" Live) is a leading global all-in-one streaming artist-first platform delivering premium music and entertainment content and live-streams from the world's top artists, expertly curated streaming radio stations, podcasts, and original video and audio-on-demand content, as well as personalized merchandise, connecting artists to millions of fans every day. The Company has streamed over 1,800 artists since January 2020 and has created a valuable connection between bands, fans, and brands by building long-term franchises in audio, video, podcasting, pay-per-view (PPV), live-streaming, and specialty merchandise. LiveXLive is available on iOS, Android, Roku, Apple TV, and Amazon Fire, and through OTT, Samsung TV, STIRR, Sling, and XUMO, in addition to its own app, online website, and social channels. The Company's wholly-owned subsidiaryÂ PodcastOne, generates more than 2.25 billion downloads per year with 400+ episodes distributed per week across a stable of hundreds of top podcasts. The Company's other major wholly-owned subsidiaries are LiveXLive, Slacker Radio,Â React Presents, and Custom Personalization Solutions. For more information, visit www.livexlive.com and follow us on Facebook, Instagram, TikTok, and Twitter at @livexlive.

Forward-Looking StatementsAll statements other than statements of historical facts contained in this press release are "forward-looking statements," which may often, but not always, be identified by the use of such words as "may," "might," "will," "will likely result," "would," "should," "estimate," "plan," "project," "forecast," "intend," "expect," "anticipate," "believe," "seek," "continue," "target" or the negative of such terms or other similar expressions. These statements involve known and unknown risks, uncertainties and other factors, which may cause actual results, performance or achievements to differ materially from those expressed or implied by such statements, including: the Company's reliance on one key customer for a substantial percentage of its revenue; the Company's ability to consummate any proposed financing, acquisition or transaction, the timing of the closing of such proposed event, including the risks that a condition to closing would not be satisfied within the expected timeframe or at all, or that the closing of any proposed financing, acquisition or transaction will not occur or whether any such event will enhance shareholder value; the Company's ability to continue as a going concern; the Company's ability to attract, maintain and increase the number of its users and paid subscribers; the Company identifying, acquiring, securing and developing content; the Company's ability to maintain compliance with certain financial and other covenants; the Company successfully implementing its growth strategy, including relating to its technology platforms and applications; management's relationships with industry stakeholders; the effects of the global Covid-19 pandemic; changes in economic conditions; competition; risks and uncertainties applicable to the businesses of the Company's subsidiaries; and other risks, uncertainties and factors including, but not limited to, those described in the Company's Annual Report on Form 10-K for the fiscal year ended March 31, 2020, filed with the U.S. Securities and Exchange Commission (the "SEC") on June 26, 2020, Quarterly Report on Form 10-Q for the quarter ended December 31, 2020, filed with the SEC on February 16, 2021, and in the Company's other filings and submissions with the SEC. These forward-looking statements speak only as of the date hereof and the Company disclaims any obligations to update these statements, except as may be required by law. The Company intends that all forward-looking statements be subject to the safe-harbor provisions of the Private Securities Litigation Reform Act of 1995.